Dickens Abridged is a fast-paced comic journey through all of Charles Dickens’ greatest hits including Oliver Twist, Great Expectations (in under 60 seconds!), Bleak House, David Copperfield, A Tale of Two Cities (in which we are promised a fully functioning guillotine and singing severed head no less!), Nicholas Nickleby, Old CuriosityShop, and, of course, A Christmas Carol.

See Tiny Tim rock the theatre with an electric guitar solo in this madcap show that promises to bring all of Dickens’ major characters – from Ebeneezer Scrooge to Bill Sykes via Little Nell – to vivid life on stage.

The show also mixes in fascinating, bizarre stories about Charles Dickens and his life.

Matthew Hendrickson (Mr. Micawber, The Ghost of Christmas Present and others): Credits include The Complete Works of William Shakespeare (Abridged) and The Complete History of America (Abridged) (Criterion Theatre), Feathers in the Snow (Southwark Playhouse). 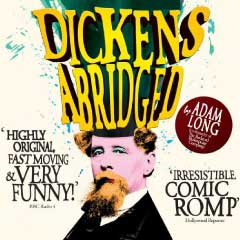