Running from 22 November 2013 to 22 February 2014, Candide is directed by Matthew White and features a great cast including Fra Fee as Candide, Scarlett Strallen as Cunegonde, Jackie Clune as The Old Lady, James Dreyfus as Dr Pangloss, David Thaxton as Maximilian, Cassidy Janson as Paquette and Ben Lewis as the Governor and Vanderdendur.

Candide features a score by Leonard Bernstein, a book by Hugh Wheeler based on Voltaire’s original and lyrics by Richard Wilbur. Additional lyrics are by Stephen Sondheim, John Latouche, Lillian Hellman and Dorothy Parker.

In the show, a young man called Candide is an eternal optimist and dreamer. He believes that everything is for the best in the best of all possible worlds, but that belief is tested to its core as his comfortable life is overtaken by an endless barrage of misfortune.

Jackie Clune’s theatre credits include Violet in the national tour of 9 to 5, the international tour of Mamma Mia, Mrs Wilkinson in Billy Elliot (Victoria Palace Theatre) and Mogadishu (Lyric Hammersmith).

James Dreyfus was last at the Chocolate Factory in The Common Pursuit. Theatre credits include the Emcee in Cabaret (Lyric Theatre), Carmen Ghia in The Producers (Theatre Royal, Drury Lane), Breakfast at Tiffany’s (Theatre Royal, Haymarket), Lady In The Dark (National Theatre) for which he won an Olivier Award. TV and film includes Gimme, Gimme, Gimme; The Thin Blue Line and Notting Hill. 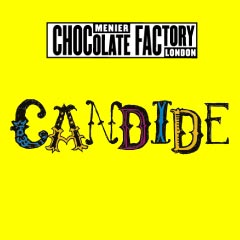