Directed by Jamie Lloyd with design by Soutra Gilmour, the West End premiere of Alexi Kaye Campbell’s modern masterpiece The Pride runs from 8 August to 9 November 2013 at the Trafalgar Studios.

The play originally ran Upstairs at the Royal Court in 2008, and a mini-festival of extra events will run alongside the play, exploring contemporary gay life and the history of gay theatre.

In the play, Philip, Oliver and Sylvia exist in a complex love triangle, which spans over half a century, living and loving simultaneously in 1958 and the present against a background of changing attitudes towards homosexuality. Past and present worlds grind together and melt apart, yet the future and its promise of sexual liberation remains ever elusive, as societal repression gives way to self-deception.

This hilarious and heart-felt play about compassion, courage and the fear of loneliness features  an outstanding quartet of young, British acting talent.

Hayley Atwell was last on stage in Alexi’s The Faith Machine at the Royal Court, also directed by Jamie Lloyd. Previous stage credits include A View from The Bridge at the Duke of York’s Theatre (for which she was nominated for an Olivier Award for Best Supporting Actress), Major Barbara at the National Theatre (for which she received an Ian Charleson Commendation in 2009) and Women Beware Women for the Royal Shakespeare Company. Hayley’s television credits include Life of Crime (for which she was nominated for a Best Actress Award at the TV Choice Awards), Black Mirror – series two, Be Right Back, Restless, Falcon: The Blindman of Seville and The Silent and the Damned, Any Human Heart, Pillars of the Earth (Nominated for Best Actress in a Mini Series, Golden Globe Awards 2011, Nominated for Best Performance by an Actress in a Leading Role in a Dramatic Program or Mini Series, Gemini Awards 2011), The Prisoner, Mansfield Park and Ruby in the Smoke. Her film credits include All Is By My Side, The Man, The Sweeney, Captain America – The First Avenger, The Duchess (Nominated for Best Supporting Actress, British Independent Film Awards 2008, Nominated for ALFS Award for British Supporting Actress of the Year, London Critics Circle Film Awards 2008) Brideshead Revisited, How About You and Cassandra’s Dream.

Harry Hadden-Paton’s stage credits include The Changeling at the Young Vic, She Stoops to Conquer at the National Theatre, No Naughty Bits at Hampstead Theatre, Flarepath at the Haymarket Theatre, The Prince of Hamburg at the Donmar Warehouse, Posh at the Royal Court Theatre, The Rivals at Southwark Playhouse and The Importance of Being Earnest at Bath Theatre Royal/National Tour/West End. Harry’s television credits include Drifters, Silk, Richard II, Waking the Dead and The Amazing Mrs Pritchard and his film credits include About Time, Having You, The Deep Blue Sea, In the Loop and La Vie En Rose.

Al Weaver’s stage credits include Inadmissible Evidence at the Donmar Warehouse, The Seagull at the Arcola Theatre, The House of Games at the Almeida Theatre, How to Curse at the Bush Theatre, Coram Boy at the National Theatre, and Hamlet at the Old Vic. Al’s television credits include Southcliffe, The Frontier, Secret State, Sherlock – The Blind Banker, Survivors, Personal Affairs and The Devils Whore. His film credits include Honeymooner, Powder, Me and Orson Welles, Marie Antoinette and The Merchant of Venice.

Mathew Horne’s stage credits include Charley’s Aunt (Menier Chocolate Factory) and Entertaining Mr Sloane at Trafalgar Studios. He is best known on screen for his regular roles in Gavin & Stacey, Bad Education and The Catherine Tate Show. Other television credits include Hey Diddly Dee, Death in Paradise, Sinbad, Marple, Worried about the Boy, Horne and Corden, Roman’s Empire, Teachers, 20 Things to do Before you’re 30 and The Proposal. 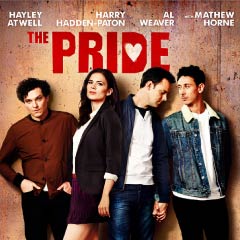