Skip to content
Gielgud Theatre, London
Booking to 21 September 2013
Sorry, this show is not currently booking.

Anna Chancellor’s theatre credits include Festival 2011’s South Downs and The Browning Version; The Last of the Duchess (Hampstead Theatre), Creditors (Donmar Warehouse, BAM) and The Observer (National Theatre). Television and film credits include Pram Face, The Hour, Four Weddings and a Funeral and Pride and Prejudice.

Toby Stephens’ theatre credits include Danton’s Death, The Real Thing, A Doll’s House and Coriolanus, and on screen Vexed, Jane Eyre and Die Another Day. More recently he has featured in Classic Chandler for BBC Radio 4.

Jonathan Kent has directed Sweeney Todd and A Month in the Country for Chichester. Artistic Director of the Almeida Theatre for twelve years, he has an international career in both theatre and opera. 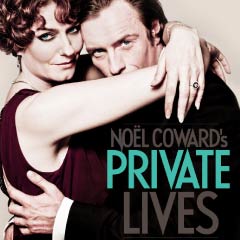 Chichester Festival Theatre season announcement
Theatre in the Park is unveiled with major new productions of Barnum and Neville’s Island Richard Eyre returns to Chichester to direct The Pajama Game The Resistible Rise of Arturo Ui returns to the Minerva Theatre, then transfers to the West End – Henry Goodman reprises his award-winning role Festival 2012 achieved record-breaking audience figures of 220,000 Theatre in the Park, a temporary state-of-the-art auditorium, will stage two productions at the heart of Chichester’s Festival 2013. The brand new space will be erected in June while the £22 million RENEW redevelopment of the Festival Theatre continues. Mirroring the Festival Theatre’s auditorium, the purpose-built temporary building will house 1,400 seats and a thrust stage. It will be just a few minutes’ stroll across Oaklands Park from the Festival Theatre site. Theatre in the Park will be unveiled with a major revival of the musical Barnum presented in association with Cameron Mackintosh. Directed by Timothy Sheader, Artistic Director of Regent’s Park Open Air Theatre, this production will star the versatile and consummate Broadway entertainer Christopher Fitzgerald in the title role. Angus Jackson directs Neville’s Island, the second production to be staged in the Theatre in the Park. Tim Firth’s comedy about a disastrous outward bound expedition promises to be a technically and visually ambitious staging. Richard Eyre returns to Chichester to direct the musical The Pajama Game, which opens the Festival season in the Minerva Theatre. Love is in the air at the Sleep-Tite Pajama Factory but sparks fly when employees are refused a pay rise. Other highlights of Festival 2013 include the return of the critically acclaimed production The Resistible Rise of Arturo Ui by Bertolt Brecht, one of the undoubted hits of Festival 2012.  Directed by Chichester’s Artistic Director, Jonathan Church, the production will once again feature Henry Goodman reprising his award-winning performance in the title role. Set in Chicago in the 1930s during the Great Depression, the play is a powerful and sharp-witted parable of the rise of Hitler. Following the Chichester run, the play will transfer to the West End’s Duchess Theatre. The second play to be directed by Angus Jackson during Festival 2013 will be the world premiere of political drama If Only by David Edgar, which takes a witty and astute look at the world of coalition government. The season ends with Another Country, Julian Mitchell’s sensitive exploration of sexuality and politics, set against the backdrop of a public school. Directed by Jeremy Herrin, Another Country is co-produced with Theatre Royal Bath Productions in association with Fiery Angel. Chichester Festival Youth Theatre, directed by Dale Rooks, will present Roald Dahl’s The Witches in the Minerva Theatre over the Christmas period. Since their appointment in 2006, Jonathan Church and Alan Finch have explored ways of developing a younger audience. Chichester Festival Theatre was one of the most successful participants in the Arts Council’s A Night Less Ordinary scheme to give away tickets to young people in 2009 - 10. During 2012 the Theatre also attracted a significant proportion of younger audience members through its temporary pop-up auditorium, Theatre on the Fly, which staged three critically acclaimed productions, Blue Remembered Hills, Playhouse Creatures and Fred’s Diner. Chichester Festival Theatre remains committed to encouraging independent theatregoing among younger people during Festival 2013 and this has led to the launch of a new scheme for 18 – 25 year olds. A special allocation of tickets priced at just £8.50 for all performances in both Theatres will be released one month before each production opens. Alongside this initiative, the Theatre is revising its approach to ticket pricing by introducing a ‘flexible’ system. This will fix ticket prices at an early-bird rate for a certain period. After this time, the Theatre will have the option to vary prices in response to demand for the most popular performances. THE PAJAMA GAME 22 April – 8 June, Minerva Theatre IF ONLY by DAVID EDGAR WORLD PREMIERE 14 June – 27 July, Minerva Theatre CHICHESTER FESTIVAL THEATRE IN ASSOCIATION WITH CAMERON MACKINTOSH PRESENTS BARNUM 15 July – 31 August, Theatre in the Park THE RESISTIBLE RISE OF ARTURO UI by BERTOLT BRECHT In a translation by GEORGE TABORI revised by ALISTAIR BEATON 15 August – 14 September, Minerva Theatre NEVILLE’S ISLAND by TIM FIRTH 11 – 28 September, Theatre in the Park ANOTHER COUNTRY BY JULIAN MITCHELL 18 September - 19 October, Minerva Theatre THE WITCHES by ROALD DAHL Adapted by DAVID WOOD 7 December – 4 January, Minerva Theatre Release issued by: Chichester Festival Theatre CHICHESTER THEATRE IN THE WEST END Book tickets to Private Lives at the Gielgud Theatre LINKS Chichester Festival Theatre website