Skip to content
The Old Vic, London
Booking to 16 November 2013
Sorry, this show is not currently booking.

Mark Rylance directs Vanessa Redgrave and James Earl Jones in Shakespeare’s comedy Much Ado About Nothing at the Old Vic Theatre this Autumn.

While young lovers Claudio and Hero threaten to have their imminent nuptials thwarted by the resentful scheming of a Prince, marriage seems inconceivable for reluctant lovers Beatrice (Vanessa Redgrave) and Benedick (James Earl Jones). Redgrave and Earl Jones take on these roles for the first time. 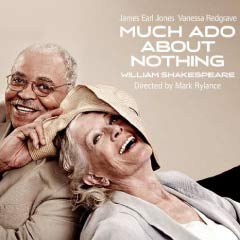 News about Much Ado About Nothing
More >