A Harold Pinter play finally makes it to the theatre named in his honour as his compelling drama Old Times plays at the Harold Pinter Theatre from 12 January 2013.

Old Times features an all-star cast including Hollywood actress Kristin Scott Thomas alternating in the role of Kate and Anna with Lia Williams, and Rufus Sewell as Deeley.

Kristin Scott Thomas teams up again with director Ian Rickson for the piece, following their successful and acclaimed collaborations on Pinter’s Betrayal and Chekhov’s The Seagull.

Pinter’s seductive and hypnotic drama is set in a remote farmhouse, as Kate, Deeley and Anna reminisce about their lives as young people in London. But conflicting memories and sexual tensions rear up to make the past seem surprisingly present.

Kristin Scott Thomas has won a number of awards for both her screen and stage roles including an Oscar nomination for The English Patient, a BAFTA award for Four Weddings and a Funeral and an Olivier Award for The Seagull. Lia Williams is a stage actress with credits including Pinter’s The Homecoming and David Hare’s Skylight. Rufus Sewell is an award-winning actor with roles including Eleventh Hour for CBS and recently Tom Stoppard’s Rock ‘n’ Roll. 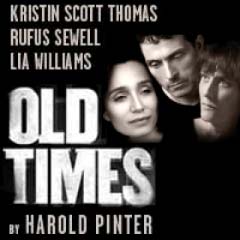