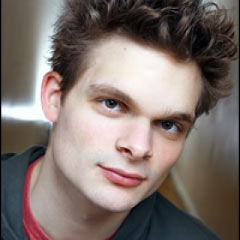 A name to watch is American actor Andrew Durand, who is winging his way to the West End this spring to make his London debut in The Umbrellas of Cherbourg at the Gielgud Theatre.

Born and raised in Roswell, Georgia, USA, he trained at the Boston Conservatory and his credits include the acclaimed Broadway production of Spring Awakening, plus The Burnt Part Boys for Playwright Horizons, Yank! for the York Theater Company and a concert performance of Bromance: The Dudesical.

Produced by the Kneehigh theatre company (Brief Encounter), this new production of  The Umbrellas of Cherbourg, at the Gielgud Theatre from 5 March, is directed by Emma Rice and will also star Olivier Award winning actress Joanna Riding and cabaret artist Meow Meow.