Appearing in one cast are Alexander Wolfe, Kate Tydman, Brenda Longman, Haydn Oakley, Peter Landi, Lizzie Muncey, Paul Hilliar and Philip Voyzey, while in the other are Eleanor McLoughlin, Neil Ditt, Joshua Griffin, Nicola Blackman, Damien Matthews, Sarah Moss, Tony Timberlake and Sam Ebenezer. Each cast will isolate from the other to limit the risk of cross-infection if a member of the cast contracts covid-19.

Due to covid-19, the show has been slightly amended to ensure no touching occurs between cast members and they are socially distances at all times. This might sound strange, but given the period the show is set in, the added distance and lack of touching is unlikely to appear jarring to audience members.

Christie’s classic whodunnit, the world longest running play resumes its record breaking run at The St Martin’s Theatre on 23 October 2020 in accordance with Government stipulations for Stage Four of the Government’s Road Map for the return of live theatre and music. The theatre will take additional covid-19 precautions backstage and in the auditorium, where capacity has been reduced from 550 to 200 to accommodate socially distanced audiences.

The classic crime thriller is set in a snowed-in manor house with a killer stalking the guests. 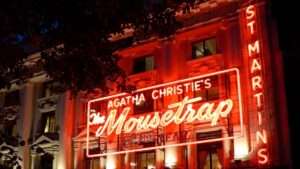