Leicester Curve theatre have announced a trio of ‘Made At Curve’ productions including the UK premiere of musical Roman Holiday.

Curves Artistic Director Nikolai Foster (West Side Story, White Christmas) will direct the musical, which has been adapted from the classic Oscar winning film by Kirsten Guenther and Paul Blake (White Christmas).

The show will feature songs from American Composer Cole Porter including Easy to Love, Just One Of Those Things and Night and Day.

Blake said “I, Paramount and the Cole Porter Estate are so honored that the UK premiere of Roman Holiday will be at the Curve Theatre in Leicester and that it will be directed by Nikolai Foster. Years ago I co-wrote Irving Berlin’s White Christmas and this Christmas I got to see first-hand the loving care and joy Nikolai’s direction brought to that show. I’m sure Roman Holiday is in the hands of one of England’s best directors and theatres – I couldn’t be happier.”

Roman Holiday is a whirlwind 24-hour adventure of romance, European old-world glamour and royal charm, as a privileged princess escapes her diplomatic dinners and duties whilst on a tour of Europe for a chance encounter with an American reporter.

The 1953 film, on which the musical is based, starred screen icons Audrey Hepburn and Gregory Peck.

Casting for Roman Holiday is to be announced.

Curve to stage musical adaptation of An Officer and a Gentleman 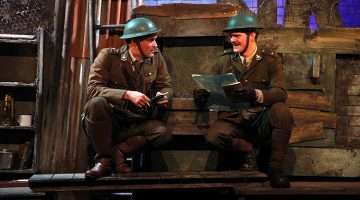