Drama school student Noah Thomas has landed the title role in the West End production of Everybody’s Talking About Jamie.

Thomas will make his West End debut in the coveted role from 6 January 2020 when Layton Williams leaves the West End production to head up the shows national tour.

Speaking about the audition process, Thomas said: “Only two weeks ago I was studying at Mountview and had very little time to prepare for the audition, which I saw as a chance to gain some experience in the industry. I was asked back the next day, not expecting anything, and they asked me if I would like to play Jamie. I couldn’t believe it… This is so surreal and I am so ready for whatever this experience holds.”

The show held an open audition call earlier this year.

Inspired by a documentary, the show opened at Sheffield Crucible in 2017 before transferring to its current home at the Apollo Theatre in late 2017. Everybody’s Talking About Jamie features music by Dan Gillespie Sells, book and lyrics by writer Tom MacRae with direction by Jonathan Butterell and design by Anna Fleischle.

Everybody’s Talking About Jamie is booking until 29 August 2020 at the Apollo Theatre, London. 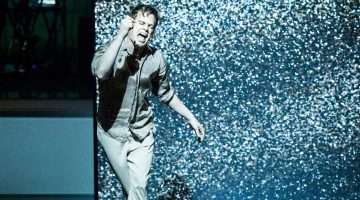