Dust of your dancing shoes the British Film Institute (BFI) in London has announced a new season of films showing some of the greatest film musicals of all time.

Running from October to December, the season opens with Gentlemen Prefer Blondes, the 1953 classic technicolor film starring Marilyn Monroe and Jane Russell as a gold digging and man-eating duo who turn sex and song into pure musical joy (17 Oct, 9 Nov).

Next up is the phenomenal smash hit Hugh Jackman led The Greatest Showman also starring Michelle Williams, Zac Efron and Zendaya. With music from Tony Award winning team behind La La Land (also featured in the season) and DEAR EVAN HEANSEN get ready for audiences to sing-along to the much loved score. (13,16,27 Nov).

Old school classics include Audrey Hepburn and Rex Harrison in the multi-award winning My Fair Lady (2,11 Nov); Julie Andrews in one of the most iconic films of all time, The Sound of Music (2,13 Nov); Rodgers and Hammerstein’s barnstorming Oklahoma! (23 Oct, 23 Nov) and Marlon Brando, Jean Simmons and Frank Sinatra in Guys and Dolls (19 Oct, 12, 18 Nov).

Less well know films include Soviet era Cossacks of the Kuban, a Romeo and Juliet-style love rivalry between chairmen of two collective farms (31 Oct); Cabin In The Sky, where the greatest African American stars of the 1940s take a musical trip to heaven and hell (16 Oct, 10 Nov); Singing Lovebirds, a warm-hearted musical about the tangled love lives of the samurai (20 Oct, 8 Nov); Queen of Hearts, starring Gracie Fields as a lowly seamstress with big dreams of stardom (9 Nov); Singin’ in the Rain’s Debbie Reynolds in a warm-hearted story of ambition in I Love Melvin; and the depression era Gold Diggers of 1933.

The Greatest Showman The Musical 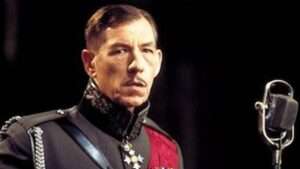