Following Andrew Polec’s shock announcement that he is to leave his starring role in the West End production of Bat Out of Hell, a new Strat has been confirmed.

Jordan Luke Gage, one of the two alternates for Strat, will be taking on the lead role from 3 September.

Gage, who made his West End debut as Hoffman in the show said “I’m overwhelmed to be taking over the role of Strat in Bat Out Of Hell. Being part of this incredible show and company has been a life-changing experience for me and I have learned so much from working with the extraordinary talent that is Andrew Polec. I want to thank everyone at Bat out of Hell for giving me this opportunity and to thank Andrew for his support and friendship.”

Simon Gordon who performs as Esquivel in the show will continue to be the alternate Strat.

Bat Out Of Hell is an exhilarating new rock musical about star-crossed lovers and rebellious youth. With its boundary-pushing spectacle, thrilling performances and reimagining of Jim Steinman and Meat Loaf’s greatest hits, the romance of rock ͚n͛ roll comes alive on stage at the Dominion Theatre.

Buy tickets to Bat Out of Hell: The Musical

Bat Out of Hell: The Musical is booking until 5 January 2019 at the Dominion Theatre, London. 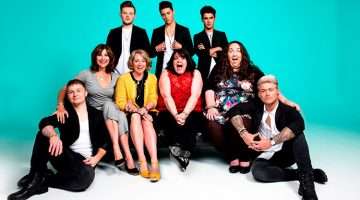