First look at Katherine Parkinson and the cast of Home, I’m Darling which opens at the National Theatre later this month.

The IT Crowd and Humans actress plays Judy in this unsettling new comedy by about one woman’s quest to be the perfect 1950s housewife …. in 21st century England.

Written by Laura Wade (Posh),  Home, I’m Darling “is a scalpel-wielding dissection of the fetishisation of wifeliness, a 21st-century cultural cul-de-sac populated and policed almost entirely by women. The 1950s ideal of cupcakes and cocktails, vintage clothes and village fetes, is all good squeaky-clean fun at one level. But as Wade identifies, this icing sugar-drenched life is not as sweet as we might imagine.” Guardian

The play is directed by Tamara Harvey with design by Olivier Award-winning Anna Fleischle, lighting by Lucy Carter, sound by Tom Gibbons and choreography by Charlotte Broom. 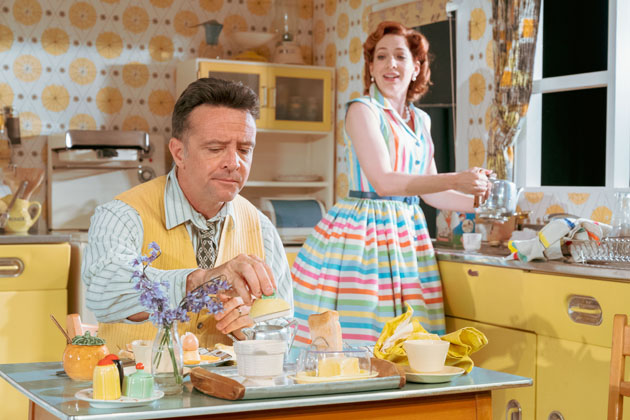 Home, I’m Darling runs from 24 July until 5 September 2018 at the Dorfman Theatre, National.