The Jamie Lloyd Company presents Moonlight / Night School as part of its extraordinary season of one-act plays by Harold Pinter at the Harold Pinter Theatre.

Celebrating the legacy of one of the “most influential, provocative and poetic dramatist of his generation” (The Guardian), this duo of plays promises an unforgettable theatrical experience.

The emotionally raw and richly funny Moonlight, directed by Olivier Award winner Lyndsey Turner, focuses on the brutality of family life and the subjectivity of memory as the past haunts the dark, lonely recesses of a dying father’s bedroom.

The brilliantly witty and vivid Night School is directed by the inventive young director, Ed Stambollouian. Set in the sweaty nightclubs and claustrophobic boarding houses of 1960s London, Night School focuses on the story of an East End criminal who returns home from prison to find that his room has been occupied by a mysterious woman with a secret.

Moonlight / Night School is booking from 1 November 2018 until 8 December 2018 at the Harold Pinter Theatre.

Moonlight
Dominated by his fear of dying, bedridden Andy is desperate for consolation from his long-suffering wife and children. As his two sons sit in the shadows rationalising their love-hate relations with him, his daughter Bridget hovers over the action, subtly suggesting that she was the victim of some terrible childhood wrong.

Set in the sweaty nightclubs and claustrophobic boarding houses of 1960s London, Night School finds Walter returning from a short stint in prison to find his room has been let to Sally.

To impress his new roommate he pretends to a big-time gangster, but is Sally also pretending? A language student at night and a PE teacher by day doesn’t ring true.

Witty and vivid, Night School is a brilliant comedy of menace.

">
Inside the rehearsal room | Pinter Four

Take a glimpse inside the rehearsal room of Pinter Four, which opens at the Harold Pinter Theatre from 1 November.

The latest offering from the Pinter at the Pinter season includes the double bill Moonlight, directed by Lyndsey Turner and Night School directed by the inventive young director, Ed Stambollouian.

Moonlight is an emotionally raw and richly funny exploration of the brutality of family life and the subjectivity of memory.

Night School is a brilliantly witty production set in the sweaty nightclubs and claustrophobic boarding houses of 1960s London.

Pinter Four - inside the rehearsal space 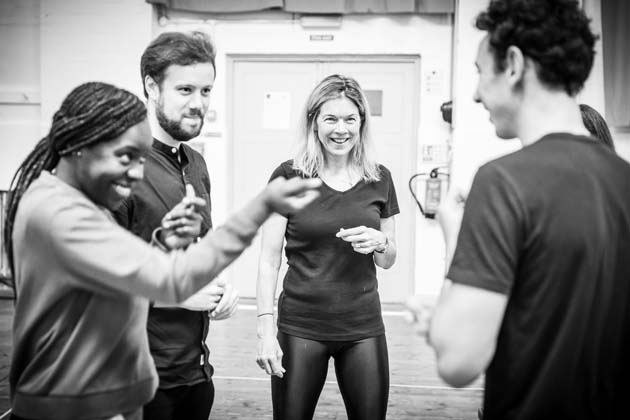 Marking the 10th anniversary of the revered playwright’s death, Pinter at the Pinter features all Pinter’s short plays, alongside a selection of his poems and sketches.

Pinter Four is booking from 1 November 2018 until 8 December 2018 at the Harold Pinter Theatre.