The Inheritance Part 1 at the Noel Coward Theatre

ABOUT The Inheritance Part 1

The West End premiere of The Inheritance at the Noel Coward Theatre.

Exploring profound themes through the turbulent and often hilarious experiences of a group of young, ambitious New Yorkers. What is the legacy left to them by previous generations? What do they owe the future and each other?

Playing across two parts, which can be seen either in one day or across two evenings.

Book tickets to The Inheritance: Part 2

A generation after the peak of the AIDs crisis, what is it like to be a young gay man in New York? How many words are there now for pain and for love?

What is the legacy left to them by previous generations? What do they owe the future and each other?

WHO’S IN IT? THE INHERITANCE PART 1 CAST

Why book The Inheritance Part 1 tickets with us? 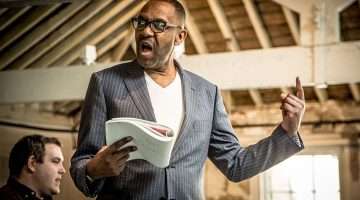 Flash Photos: Lenny Henry in rehearsal for The Resistible Rise of Arturo Ui