This August will see the first ever revival of Alan Bennett’s The Habit of Art, starring Matthew Kelly and David Yelland.

Bennett’s play explores the joy, pain and emotional cost of creativity, in addition to friendship, rivalry and heartache during a fictional meeting between poet W. H. Auden and composer Benjamin Britten.

Kelly is probably best known to many for his TV work presenting Stars in their Eyes and You Bet!, his numerous theatre roles include Waiting For Godot with Ian McKellan, Sign of the Times – the Tim Firth play, and the musical Lend Me A Tenor!

David Yelland is memorable for playing the main roles on TV in both David Copperfield, and Rumpole of the Bailey.

He has appeared in A Winter’s Tale (Shakespeare’s Globe), Witness for the Prosecution (London County Hall), Deathtrap (Garrick), The Deep Blue Sea (Haymarket), amongst multiple other roles.

The play within the story, Caliban’s Day, is set in 1973 in Auden’s rooms at Oxford. Britten turns up unexpectedly, their first meeting after falling out over their failed opera Paul Bunyan.

The Habit of Art is directed by Philip Franks, award winning actor and director, who is probably best known for TV work including Bleak House, The Darling Buds of May and Heartbeat.

Sara Kestelman to star in The Lady In The Van 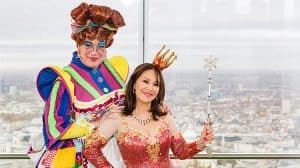 Matthew Kelly and Arlene Phillips get into Panto mode