What better way to celebrate Dusty Springfield’s birthday, than to announce a new round of casting for the roles of Dusty’s manager and mother in the new musical about Dusty’s life.

Alongside Katherine Kingsley (Piaf, Singin’ in the Rain) in the title role, comedian and actor Rufus Hound (The Wind in the Willows, Dirty Rotten Scoundrels) will play her manager Billings, and Roberta Taylor (The Bill, EastEnders) the part of Dusty’s mother Kay.

A musical driven by Dusty’s powerful soulful pop hits, which include, You Don’t Have to Say You Love Me, I Only Want to Be with You and Son of a Preacher Man, is backed by the promise of a fiercely funny script charged with emotion, by award winning writer Jonathan Harvey (Beautiful Thing, Coronation Street).

With a career emerging in the 1950s and spanning four decades, Dusty Springfield who was originally born in London became recognised across the globe for her iconic look and soulful voice.

With her 1969 album ‘Dusty In Memphis’ often considered one of the greatest albums of all time, Dusty is still loved by many and gained entry into both the US Rock and Roll and UK Music Halls of Fame.

Drawing on the memories of Pat Rhodes (her life long personal assistant), Vicki Wickham (Dusty’s manager, close friend and biographer), and the friend and record company executive Tris Penna, DUSTY tells the true story of her life in the spotlight.

Rufus Hound will be playing in Noël Coward’s Present Laughter opposite Katherine Kingsley at Chichester Festival Theatre prior to DUSTY.

A well known presenter, comedian and actor his diversity is clear in his on screen roles including Doctor Who, Cucumber, Hounded, and stage roles including What The Butler Saw (Theatre Royal Bath / Leicester Curve), Don Quixote (RSC), Dirty Rotten Scoundrels (Savoy Theatre London) and most recently Mr Toad in The Wind in the Willows (London Palladium).

Roberta Taylor is best known for her tv roles, portraying Inspector Gina Gold in The Bill and Irene Raymond in East Enders. Other screen credits include Luther, Shakespeare & Hathaway and Bleak House. 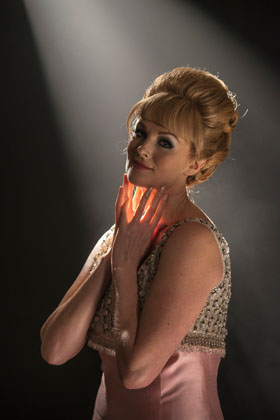 Writing his first of fifteen plays in 1987, Jonathan Harvey crafted Beautiful Thing, which was later made into an acclaimed film and he is also responsible for Babies and Boom Bang-A-Bang.

Over the years John has been Bafta and Olivier-nominated, with an Evening Standard, George Devine and John Whiting Award under his belt. His television work includes Coronation Street which he has worked on since 2004, Beautiful People and Gimme, Gimme, Gimme.

His diversity can be seen in the work he has contributed to shows such as Rev, Shameless, At Home With The Braithwaites, The Catherine Tate Show and Tracey Ullman’s Show. The author of five novels, Jonathan Harvey is often considered ‘the new theatrical voice of his generation’.

Likely to transfer to the West End, the Dusty Springfield Musical is set to premiere in Bath in June with dates confirmed at The Lyceum in Sheffield, Newcastle Theatre Royal, and The Lowry in Salford.