Broadway’s Gordon Greenburg is to direct a revival of Barnum at the Menier Chocolate Factory.

Also joing the cast are Celinde Schoenmaker (The Phantom of the Opera, Les Miserables), Tupele Dorgu (Mamma Mia!, Coronation Street), Harry Francis (Fiddler on the Roof, The Book of Mormon).

Barnum tells the story of P.T. Barnum, the “Greatest Showman on Earth,” who combines razzle-dazzle with charm and brass to sell “humbug” to cheering crowds.

With music by Cy Coleman, lyrics by Michael Stewart and book by Mark Bramble, the musical premiered on Broadway in 1980 and was closely followed by a London production in 1982 with Michael Crawford in the titular role.

Cameron Mackintosh revived the musical at Chichester Festival Theatre in 2013 and it subseuqently toured the UK in 2014 with Brian Conley playing Barnum, at the time it was thought Mackintosh would bring the show to London however it never eventuated. 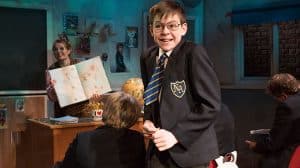