A reviews round-up for Five Guys Named Moe at the Marble Arch Theatre.

Known for its toe-tapping, irresistible hits of jazz legend Louis Jordan, it’s a musical light on plot but big on fun. The perfect ‘date night’ show!

Packed with an uplifting soundtrack of soul, blues, gospel and r ‘n’ b, and led by the all-singing, all dancing Five Guys, Five Guys Named Moe is ‘so full of energy that it zings’ (The Times).

The choreography is undoubtedly slick, the singing is accomplished and the dancing and acrobatics at times breathtaking.

So, put plot aside, and join the party at Five Guys Named Moe.

"It’s just a darned good excuse to revisit some serious jazz-funk and try to conjure up a party atmosphere." The choreography by Andrew Wright is a mixture of slick, relaxed and witty; the singing is accomplished; the dancing and acrobatics at times breathtaking (take a bow Dex Lee for some wince-making splits); the music, by a five man and one woman band, on the money (the evening was worth it for me for a sax solo by Jessamy Holder)" Tim Auld, Daily Telegraph

"It’s the show's biggest weakness and strongest suit that it has virtually no plot." "Toss in some balletic moves, killer quips, and a fine ensemble - not to mention the potent Hurricane cocktails being proffered at the bar - and you've a recipe for some serious fun." "Five Guys…’ barely had a plot to begin with – three Hurricanes down and you’ll probably be delighted that they’ve found a way to drag out the good vibes. The venue is lovely. The drinks are excellent. It’s a corrective to the twee whiteness of half the musicals that wash up in the West End." Andrzej Lukowski, TimeOut

"This song and dance of a show begins with the command: 'Let the good times roll!'" "With a pop-up circus-tent theatre turned into a New Orleans jazz club, this revival of the 1990 production is so full of energy that it zings" Ann Treneman, The Times

"There is, in short, the possibility of a rollicking good evening. Unfortunately, I found the whole thing interminable." "Oh, for a bit of plot to help things along. What we have, however, is a concert of catchy Jordan numbers, such as Saturday Night Fish Fry and Choo Choo Ch’Boogie, pegged to the flimsiest of pretexts." "Peters ensures that the energy levels never falter and choreographer Andrew Wright has the sweet-voiced Moes work up a heady sweat as they leap their way around a circular moving walkway." Fiona Mountford, Evening Standard

"This revival barrels along in great style, even if the story is little more than an excuse to get the show kick-started." "The dancing is cool and slick, ranging from the shimmy-shake to a sequence of James Brown splits from Know Moe (Dex Lee) that made me wince. And the vocals are even better, with each Moe bringing something to the party." "The band rocks and swings with panache and features notable sax player Jessamy Holder." Neil Norman, Express

"it’s all done with such effortless charm and infectious exuberance that when the words to Push Ka Pi Shi Pie fluttered down from above, the audience cheerfully raised the roof and then leapt up to join a conga line. "The perfect date night." Georgina Brown, Daily Mail 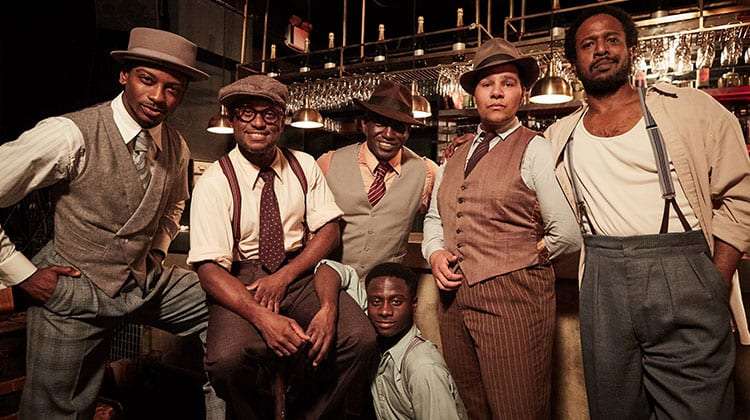