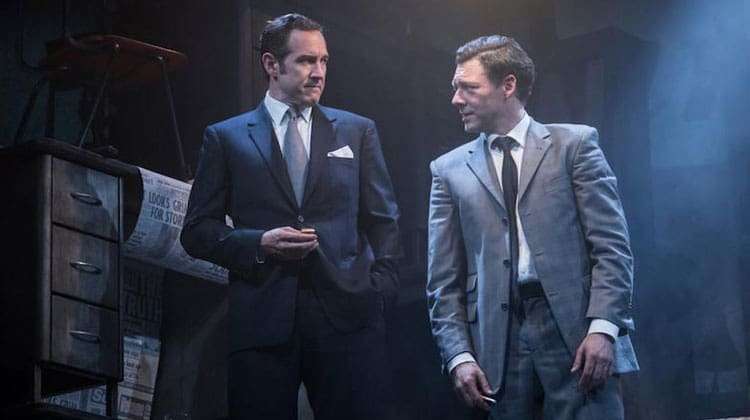 A reviews round-up for Ink at the Almeida Theatre

James Graham’s much anticipated drama about the founding of The Sun newspaper has opened to overwhelmingly positive reviews at the Almeida Theatre.

Starring Bertie Carvel (Matilda, The Hairy Ape) as the ‘Dirty Digger’ Rupert Murdoch and Richard Coyle (Coupling) editor of the Sun Larry Lamb, the production is applauded for not only the nuanced performances of the actors but also for allowing audiences to draw their own conclusions about press ethics.

Following the success of This House and now Ink, James Graham has firmly established himself as a first rate political dramatist.

Ink runs until 5 August 2017 at the Almeida Theatre.

“Graham’s three-hour epic is occasionally overloaded with expository detail and meanders a little in its second half. But, buoyed by his trademark appetite for asking awkward questions, it’s a shrewd and absorbing look at journalistic ethics.”

“Even-handed in his treatment of the Australian mogul who transformed the complexion of mass media, [James Graham is] nonetheless stingingly astute about the cheapening of news values and Fleet Street’s cult of a cynical cruelty that masquerades as fun.”

“Bertie Carvel’s performance as Murdoch is the big draw, and from the moment he first appears, arguing over dining arrangements and promising to be an iconoclast, he resembles Shakespeare’s Richard III, hunched yet flamboyant.”

“Rupert Goold’s production pulses with energy, occasionally threatening to turn into a mischievous musical. Designed with a fine eye for writers’ messiness by Bunny Christie, it’s packed with zesty performances.”

‘James Graham has always striven to be non-partisan. And his Almeida debut… may discomfit a liberal audience with its sympathetic, even romantic depiction of the way in which a band of ragtag journalistic rejects created the country’s biggest-selling newspaper.’

‘It’s not without teeth, though, and the empathy Rupert Goold’s production musters for the paper’s editor Larry Lamb (Richard Coyle) and team is not extended to proprietor Rupert Murdoch, who Bertie Carvel basically plays as the actual Devil.’

‘The peculiarity of ‘Ink’ is that Carvel’s Murdoch feels like an outsider to the play as much as he does to the newspaper industry. Really, ‘Ink’ is more about Lamb. And Coyle is excellent: he’s no sleaze merchant but a smart, funny, working class Yorkshireman whose mounting disenchantment at the establishment propels him from spirited rebellion to something bleaker.’

‘what makes this such a good and gripping piece of theatre is that it doesn’t preach us sermons about press ethics but leaves us to draw our own conclusions from the known facts.’

‘The first half is a breezy, often very funny, account of the process of creating a new style of popular newspaper. ‘

‘It is only in the second half that Graham begins to explore the implications of the circulation-war initiated by Murdoch and Lamb.’

‘And inevitably there comes the moment when Lamb, with understandable nervousness, decides that Page Three nudity is the one way to steal a march on the Mirror. Rather than read us a lecture about tabloid titillation, Graham simply suggests this is the logic of cut-throat, commercial competitiveness.’

‘This refusal to moralise applies to the performances. Bertie Carvel plays Murdoch not as some horned monster but as a man driven by the ruthless logic of the market, and as someone who prizes business success over the consolations of friendship.’

Goold’s production, with an outstanding set by Bunny Christie comprising an Everest of newspaper desks, fairly whizzes along and captures the dizzy excitement of the hot metal era.

“Bertie Carvel fascinates as Murdoch, now aged 86 and executive chairman of News Corp, the owner of The Times, here portrayed sympathetically as a complex outsider, lean and hungry but also by turns explosive and thoughtful. Richard Coyle is brilliant as the bumptious Yorkshire tabloid genius who was Lamb.”

“It’s a heady brew that Graham creates, many stories interwoven, shouted and sworn about, all in the humming clatter of an old-fashioned newspaper office. The set, by Bunnie Christie, is a thing of wonder, desks piled on top of each other, a cataclysmically messy scene.”

“The second half is gripping as Lamb wrestles with the consequences of his creation and his quest to beat the bestselling Mirror. So how does the story end? That’s for you to decide.”

‘Ink is funny, but thankfully, never arch. It looks at the scabrous stories and cynicism, but it also does justice to the wit and skill of Sun journalists – about which many of the bien pensant, Guardian-reading Almeida crowd, probably has no idea.’

‘Bertie Carvel is suitably reptilian – and brilliant – as the Dirty Digger. A shameless visionary who understood that he could beat the media establishment by giving readers, not what the great and the good thought they needed, but what the readers wanted: fun, sex, holidays – and television.’

“You can always rely on London intellectuals to overstate the power of the popular press and it happens again in a sparky new play about the arrival of Rupert Murdoch’s Sun in the late 1960s.”

“James Graham’s Ink has a breathless first half as the young, slim Murdoch hires no-nonsense Yorkshireman Larry Lamb as editor for the title he bought from The Mirror Group in 1969… In Graham’s play, Murdoch and Lamb felt responsibility only to their circulation figures and if that meant reporting on things close to home and persuading young women to pose topless, so be it.”

“Rupert Goold’s tightly-drilled production is staged in a Fleet Street office, chairs and files and papers in various storeys. There is cussing and plenty of laughter, especially in the first half. On hearing the Sun has only a limited number of Es for a headline-sized font, Lamb says ‘let’s hope nothing happens to the f****** Bee Gees’.”

“The second half is darker, Lamb fighting with his conscience while Murdoch’s attention wanders to television companies. And there lies the shortcoming of this enjoyable and peppery play: the idea that the Sun, or for that matter the Mail, has anything like the power of the broadcasters, is just nuts. Or as the left says, ‘fake news’.”

James Graham’s new play Ink is a fascinating study of Fleet Street as it once was.’

‘Graham’s skill lies in the way his play tells its story and tells it well, while also asking questions about the role of the press in society today, its power, influence – and responsibility.’

‘Richard Coyle’s Lamb – is the play’s driving force and superb in his own way, but each time Carvel appears on stage the production shifts up a gear.’

‘While Graham does not shy away from exploring journalism’s moral ambiguities, there’s also a great deal of affection in evidence in Rupert Goold’s production. The play lovingly recreates a world, clouded in cigarette smoke and fuelled by booze but also with codes, rules and principles, that Murdoch would be instrumental in sweeping away.’ 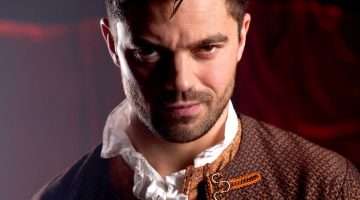 Behind the scenes at The Libertine photoshoot