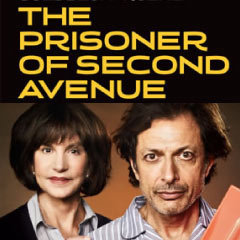 THE PRISONER OF SECOND AVENUE

A new production of Neil Simon’s 1971 comedy The Prisoner of Second Avenue is the first project for the theatre company in the West End, and stars Hollywood actors Jeff Goldblum (Tall Guy) and Mercedes Ruehl (The Fisher King) for a limited season at the Vaudeville Theatre.

Wednesday sees the opening of Ghost Stories at the Duke of York’s Theatre in London, following a sell-out season run at the Lyric Hammersmith.


A truly terrifying theatrical experience written and directed by The League of Gentlemen’s master of the macabre, Jeremy Dyson, and Andy Nyman, co-creator and director of Derren Brown’s television and stage shows and star of Dead Set and Severance.

The show is strictly for theatregoers aged 16 and older.