Branagh and Brydon delight in this comic French farce

Whilst farce is often said to be an acquired taste, this production seems to hit all the right notes.  What’s obvious from the reviews is that Branagh and Brydon are clearly having a great time in a production which will only get better as the run continues.

The Painkiller runs until 30 April 2016 at the Garrick Theatre.

Read reviews of The Painkiller from The Times, The Evening Standard, The Guardian, The Telegraph, The Daily Mail, Independent and The Stage.

Book tickets to The Painkiller

“Branagh and Brydon are perfect pair in furious farce. Doors are slammed and trousers dropped in this bawdy hitman caper which teases out the comic skill of its leads.”

“Brydon’s main task as Brian is to convey a nerdy niceness that causes mayhem, something that he accomplishes with great skill. Branagh, like all the best straight actors is also a natural comic.”

“Foley’s direction includes the requisite amount of slammed doors and dropped trousers and, bringing the show in at 90 minutes, is suitably fast and furious. It may not be to everyone’s taste but, in these sombre times, I found the show offered a restorative tonic.”

“Brydon and Branagh have a ball, Sir Ken on good form as a tough-guy assassin whose murderous intentions are soon disrupted by needy Dudley. Mr Brydon is well cast as this maddening fusspot.”

“Branagh playing a man stoned out of his head on horse tranquilliser. He does this rather brilliantly, even if the direction runs a little out of hand.”

“Mark Hadfield, perhaps slightly on autopilot, does his normal comedy routine as the hotel porter.”
“It makes for a cheerful enough evening and offers the sight of not only Sir Ken with his trousers round his feet, but also Rob Brydon.”

“Sir Ken and co are a riot with their trousers down but The Painkiller is not quite needle sharp.”

“Branagh clowns around to score a hit as farce’s hilarious hitman.  The physical comedy is enjoyably frenetic.”

“Kenneth Branagh tends to come across as a warm but fundamentally very serious actor, at his best when negotiating some mighty Shakespearean scene. Yet here, in Francis Veber’s dizzy French farce from the Sixties, he’s almost unrecognisable.”

“First his character, professional hitman Ralph, appears smooth and purposeful. But it’snot long before he’s reduced to a quivering, jabbering, drug-addled mess, and Branagh’s  performance is a riotous feat of clowning, complete with bizarre accents and violent pratfalls.”

“The play, despite director Sean Foley’s updating, shows its age — not least in implying there’s something inherently amusing about two men in bed together. The pervasive daftness and innuendo won’t convert sceptics allergic to farce. But the physical comedy is enjoyably frenetic, and there’s a potent chemistry between the leads.”

“Laugh? We almost died. No, wait, they almost died, and more than once. There is nothing subtle about this farce by Francis Veber, adapted by Sean Foley, who also directs. It’s 90 minutes without an interval, crammed with farcical action, what with the door slamming, guns going off, mistaken identities, shower disasters, trousers up and down. Can a play be categorised as underpants noir? I do hope so.”

“The stand-out star is Brydon, the husband who has lost his mojo, so naff that he thinks his wife Michelle really wants to hear him sing ‘Lady in Red’ at breakfast.”

“Stylish. Funny. Raucous. But I really wish Brydon would stop singing ‘Lady in Red’. Now I have an earworm. Is that a crime? I think it might be.”

“The Painkiller treats its audience to the double-whammy of Welsh comedy actor Rob Brydon careering about in the skimpiest briefs and his co-star Kenneth Branagh – Sir Ken! – in only slightly less revealing underwear, twitching and flexing his pecs too.”

“Supplementing the double-act and often accelerating the madness are those who look in on the action: Mark Hadfield gives a supporting tour de force as the mincing, interfering and increasingly bewildered porter; Alex MacQueen shines too as Dudley’s loathed rival Dent.”

“The Painkiller sees Branagh and Brydon at their comic best. In the course of this delirious 90-minute farce there’s not an opportunity for a gag, visual or verbal, that’s passed up.”

“This medicinal froth gives the West End a perfect shot in the arm.”

“Rob Brydon is hilarious and endearingly irritating as Dudley.  The proceedings are enjoyable but rarely generate the requisite helpless hilarity and have a rather dated feel”. 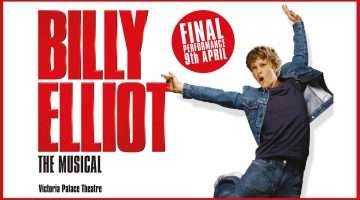