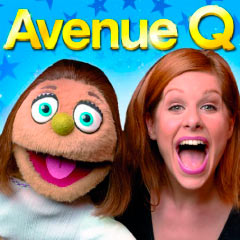 The Cameron Mackintosh-produced show has proved consistently popular with audiences since it opened four years ago at the Noel Coward Theatre.

Cameron Mackintosh said earlier this year when the show moved to the Wyndhams: “Little did I think when I fell in love with Avenue Q in New York, that it would come to London in one of my theatres. It is just fabulous that audiences are still hysterical with laughter into our fifth year, with its witty and timely songs being as pertinent as ever.”

A new cast has recently joined the show including Paul Spicer, (Notes from New York, Taboo, Fame) as Princeton/Rod, Jacqueline Tate (Phantom of the Opera) as Christmas Eve, the award-winning Delroy Atkinson (Jihad! The Musical) as Gary and Sion Lloyd as Brian.

Avenue Q is a mischievous, charming musical about characters on a downtown New York street trying to make sense of life’s burning issues: love, work, relationships and, above all, just how are you supposed to pay the bills with a BA in English?

The Wyndham’s theatre is the third London home for Avenue Q, which opened at the Noël Coward theatre in 2006 before transferring to the Gielgud theatre in 2009. The show is directed by Jason Moore, with music and lyrics by Robert Lopez and Jeff Marx and a book by Jeff Whitty.

SPECIAL OFFER: Save £10 on tickets to see Avenue Q at the Wyndhams Theatre in London

">
Crazy For You to open at the Gillian Lynne Theatre in 2023
">
Oklahoma! announces casting for West End run at the Wyndham’s Theatre
">
Photos: Life of Pi releases new images for final months in the West End
">
Oklahoma! in the West End: Exclusive Tickets Pre-sale
">
Dates set for Oklahoma! West End run at the Wyndham’s Theatre
">
Martin Guerre in new revival: Les Mis creators Boublil & Schoenberg to reimagine the show

">
Cameron Mackintosh speaks about Phantom closing on Broadway
">
The Phantom of the Opera to close on Broadway after 35 years
">
Oklahoma! to transfer to the West End
">
Stage Spy: Is Crazy For You heading to the West End?
">
Life of Pi announces final booking period in London’s West End and new cast
">
The Phantom of the Opera tickets now available to book March 2023 with new performance schedule from October
">
New casting announced for The Phantom of the Opera in London
">
Stage Spy: Sondheim Tribute ‘Old Friends’ to be televised?
">
Oliver Award winning Life of Pi extends run at the Wyndham’s Theatre to October 2022
">
Old Friends Reviews, Photos & Videos – Stephen Sondheim tribute gala at the Sondheim Theatre in London ★★★★
">
Old Friends Stephen Sondheim Gala Concert: Full Song List