Disney confirm dates for Aladdin in the West End

Disney have confirmed hit Broadway musical Aladdin is to open in the West End at the Prince Edward Theatre.

The award winning show which is currently running on Broadway will begin previews from 27 May 2016 with opening night scheduled for 6 June 2015.

Broadway cast member Trevor Dion Nicholas makes his West End debut when he reprises the role of the Genie for the West End production. 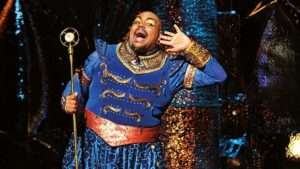 The musical comedy, based on the Disney animated film that featured the voice of Robin Williams as Genie and Lea Salonga as Princess Jasmine, tells the story of a young street urchin who finds a magic lamp with a Genie inside and manages to woo a princess.

The production which is directed by directed by Casey Nicholaw features several of the original songs from the hit film including “Prince Ali“, “Friend Like Me” and Rice’s and Menken’s hit song “A Whole New World“.

Quiz at the Noel Coward Theatre