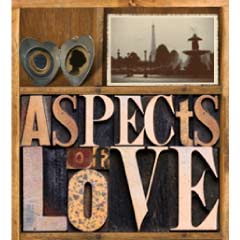 With book and lyrics by Don Black and Charles Hart, Aspects of Love will see the return of director Trevor Nunn to the Menier after his enormous success with A Little Night Music, currently starring Catherine Zeta-Jones and Angela Lansbury on Broadway. Nunn also directed the original West End production of the show in 1989 at the Prince of Wales Theatre.

Willets has worked with Trevor Nunn before, notably playing Jean Val Jean in Nunn’s RSC production of Les Miserables at the Palace Theatre. He is also no stranger to Andew Lloyd Webber’s work having covered most major roles including the Phantom in The Phantom of the Opera at Her Majesty’s, Jesus in Jesus Christ Superstar at the Barbican, Old Deuteronomy in Cats and was Olivier award nominated for his recent performance as Max von Mayerling in Sunset Boulevard at the Comedy Theatre. Other roles include Major Lee in Someone Like You at the Strand Theatre, Zero Janvier in Tim Rice’s Tycoon, Dr Jekyll and Mr Hyde in Jekyll, Adam Pontipee in Seven Brides for Seven Brothers, Julian Marsh in 42nd Street and numerous national and international concert tours.

The Andrew Lloyd-Webber musical will premiere at the venue from7 July, with designs by David Farley, choreography by Lynne Page, lighting by Paul Pyant, musical supervision by Caroline Humphris, orchestrations by David Cullen and sound by Gareth Owen.

The show is based on David Garnett’s novel and tells the story of passion, love and loss across three generations of a family and their companions set against the background of 1940’s France and Italy.  Alex Dillingham, a young student travelling through France, falls in love with the alluring actress Rose Vibert.  As the pair embark on a passionate affair, the unexpected arrival of Alex’s uncle changes their lives forever.  A love story spanning twenty years binding six people and three generations as they come to appreciate that love changes everything.

Young American actor Michael Arden has appeared in Big River and The Times They Are A-Changing on Broadway, and off Broadway productions of Swimming in the Shallows, Bare, Ace, God of Vengeance, As You Like It, The Winter’s Tale and The Secret Garden.  TV roles include Bones, Numbers and Grey’s Anatomy.

UK actress Katherine Kingsley is currently starring in the UK tour of The 39 Steps, and other credits include Piaf (Olivier Award nomination), The Truth Will Out, The Black and White Ball, Hobson’s Choice, High Society and The Canterbury Tales. On-screen work includes The Bill, Hollyoaks and Casualty.