At the end of Thomas Middleton’s 1621 tragedy Women Beware Women, there are more dead bodies on stage than in the final moments of Hamlet. It’s the gory, Grande Guignol climax to a rude, crude Jacobean romp in which lust, greed, incest, murder, sexual infidelity and rape are the order of the day – and night. 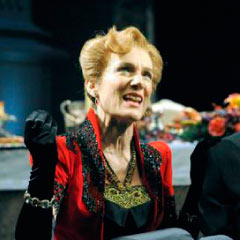 It all begins when a rather nerdish and indigent Florentine bank clerk called Leantio (Samuel Barnett), elopes with the beautiful Bianca (Lauren O’Neil), a wealthy heiress, and marries her.

Unbeknownst to the hapless Leantio, Bianca has caught the eye of the libidinous Duke of Florence (Richard Lintern), who, with the conniving help of the reptilian widow Livia (Harriet Walter), lures Bianca to his courtly residence where he rapes her.

Livia also cunningly contrives a marriage between her niece Isabella (Vanessa Kirby) to a punkish idiot (Harry Melling) while at the same time paving a way for her brother Hippolito and Isabella to have an incestuous affair on the side.

And if that’s not damage enough, she then sets her sites on poor Leantio whom she seduces with promises of wealth and status.
Though it is the scheming of the kind of treacherous woman the play’s title asks you to beware, it’s the Duke and Hippolito who benefit most from her machinations.

As in most Jacobean tragedies, immorality comes at quite a price with the web of deceit in which the protagonists are ensnared resulting in murder most foul.

Director Marianne Elliott stages the play’s bloody final act as an orgiastic masque in which actions speak more ghoulishly than words. She’s assisted by Lez Brotherston’s set which goes into permanent revolve mode during this elaborate and inventively staged dance of death.

Once again the full resources of the Olivier’s remarkable facilities are effectively employed with particularly striking use being made of a quartet of impressive chandeliers.

Yet the most memorable scene is the intimate chess-playing encounter between Livia and Leantio’s frumpy old mum (Tilly Tremayne) which takes place while the Duke is having his way with Bianca in another part of the court. Unaware that her daughter-in-law is being ravished against her will, the old woman listens innocently to the chess-related metaphors and sexual innuendos spoken not so innocently by the knowing Livia.

It’s staged in modern dress and with an accompanying jazz score. But as the atmosphere at its very core is so endemic to the morals, mores and machinations of Jacobean tragedy, to take it out of the period that defines it seems pointless.

Still, it’s a generally well-staged revival with a deliciously subtle yet poisonous performance from Harriet Walter, who, with Harry Melling’s preening, doltish idiot, stands out from a cast that’s merely routine.

‘The wealthy widow Livia, played in the very likeness of the Duchess of Windsor by an elegantly acerbic Harriet Walter.’

‘The anti-heroine, Livia, played by Harriet Walter like a mix of Cruella De Vil, the White Witch in the Narnia books and Margaret Thatcher in her prime.’

‘The closing carnage… presented as a brilliantly choreographed dance of death complete with black angels and sinister exotic references.’

‘As well as Walter’s compelling performance, there is much fine work elsewhere, especially from Lauren O’Neill as the initially warm and loving Bianca, whom we see hardening in the play; from Richard Lintern as the suave, fascistic Duke; Vanessa Kirby as the sweet teenager gulled into incest with her uncle; and Harry Melling as the idiotic ward she is supposed to marry, and who spends much of his time trying to look up her dress.’

‘Dark, decadent and immensely stylish, Women Beware Women makes you laugh even as you shiver.’

‘The climactic scene of heartless lust, greed and carnage is one of the best ever staged at the Olivier. The stage – haunted by devilish creatures in skull caps and black wings – revolves, revealing one spectacular4 fatality after another in a whirling dance of death.’

‘Wickedly entertaining theatre. And thanks to the Travelex £10 ticket scheme, available for £10.’

‘Elliott updates the action from Renaissance to 1950’s Florence. This makes for a slinkily good-looking production, with women in Dior New Look, as set from Lez Brotherston that is at once opulent and oppressive, and lashings of sultry, dark jazz music (Olly Fox).’

‘It is a world steeped in glamour, decadence and greed. Here men treat women like parcels, trading them, owning them, locking them away. It is only Livia, a wealthy widow, who can pull strings. Harriet Walter’s Livia is superb: her poise, acid wit and attractive energy put you in mind of Richard III’

‘The acting is beautifully precise, with strong performances from Samuel Barnett as Bianca’s jealous husband, Vanessa Kirby as Isabella and Harry Melling as the idiot she must marry. It is a witty production, revelling in Middleton’s bitter black humour and enthusiasm for sexual innuendo.’

‘The production gradually darkens as it approaches the climactic masked ball, delivered here on the revolving stage as a dizzying dance of murder.’

‘This is a staging that wraps its inky fingers around you and holds you, spellbound’

‘Here is a court thick with corruption and Marianne Elliott’s almost hypnotic production updates the action to the late fifties / early sixties and perfectly captures the louche immorality.’

‘It all adds up to a typically Jacobean-style bloodbath but this terrific production gives us enough humour to lighten the load, particularly with Harry Melling’s ludicrously camp heir.’

‘In a top quality cast, Harriet Walter is magisterial as Livia and Lauren O’Neill makes for an impassioned Bianca.’

“This is a rich production, full of the theatrical flourishes that are the director Marianne Elliott’s trademark.”

“Harriet Walter, as Livia, is a cold-eyed manipulator, and comically vampish when seducing Leantio (Samuel Barnett), but the younger actresses are outstanding. Lauren O’Neill, as Bianca, conveys a potent mix of anger and bitter bewilderment, her delivery crystal clear. Vanessa Kirby is excellent and understated as the unwittingly incestuous Isabella. Harry Melling, as the obsessively bawdy Ward, delivers nice clownish comedy.”

“A fiercely felt, finely wrought, seldom-seen play by one of Shakespeare’s contemporaries. A play whose subject is corruption and whose language is pungent. Producing such a drama is, surely, one of the reasons the National theatre needs to exist.”

“It’s an extravaganza that Elliott delivers with relish. There’s a strong case against ever updating Women Beware Women. The inturning, winding verse is of a piece with a Jacobean architecture of dark corners, twists and complications. But this production – in which every densely written line is delivered with brutal clarity – is as good as a modern dress could be.”

“Walter, who is at the peak of her powers as an actor, is, here and throughout, a magnificent source of fascination and energy.”

‘Marianne Elliott’s production of this 1621 play by Thomas Middleton culminates in a gorgeous, debauched masked ball. ‘

‘Elliott brings a lavish sensibility to his work’

‘Harriet Walter gives a performance at once measured and full of relish: there’s passion in her destructiveness, yet also clarity in her unscrupulous plans. Lauren O’Neill makes a sympathetic Bianca, while Harry Melling gets to prance around in a delightfully cretinous fashion as The Ward, and Samuel Barnett’s Leantio is a nerdy sort of libertine.’