Emma Rigby and Daniel Boys in Wolfboy; Ray Quinn to strut his stuff in Dirty Dancing at the Aldwych Theatre; Russ Abbot takes over from Griff Rhys Jones in Oliver! 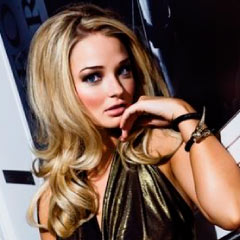 The new musical premiered at the Edinburgh Festival fringe last year and has a book by Russell Labey, music and lyrics by Leon Parris and is based on a play by Brad Fraser.

The musical is a dark and disturbing tale of two troubled teenage boys locked in an asylum for their own good. Bernie has attempted suicide; David may or may not have the powers of a wolf. For them the outside world is a frightening place of abuse and violence. Bernie’s brother Christian and Cherry the young nurse on the unit, also hide secrets that surface in the night, when the moon is full.

Daniel Boys appeared on BBC talent show Any Dream Will Do in 2007  and has since performed in a number of concerts and events including a special guest artist on John Barowman’s UK tour, and is a regular on BBC Radio 2’s Friday Night is Music Night.

X Factor and Dancing on Ice star Ray Quinn is to join the cast of Dirty Dancing at the Aldwych Theatre this summer, from 26 July to 27 November 2010.

Quinn, who recently appeared as Danny in Grease at the Piccadilly Theatre, will play the role of Billy Kostecki, Johnny Castle’s cousin, in the show for a limited season from 26 July. He will sing two iconic songs from the show – “Do You Love Me?” and “(I’ve Had) the Time of My Life”.

Other cast includes Martin Harvey as Johnny Castle and Hannah Vassallo as Baby.

Dirty Dancing is now in its fourth year at the Aldwych Theatre and brings the action and music of the iconic film to the stage.

Special offer: Save £22.50 on tickets to Dirty Dancing at the Aldwych Theatre in London

He stepped in for Rowan Atkinson last year and proved such a hit that Russ Abbot is to make his return to the Theatre Royal Drury Lane in June, starring as Fagin in Cameron Mackintosh’s big-budget production of Oliver!

Taking over the role from Griff Rhys Jones from 14 June, Abbot will join Kerry Ellis as Nancy, Steven Hartley as Bill Sikes and Stephen Moore as Mr Brownlow.

No stranger to the role of Fagin, Abbot played the part in Mackintosh’s 1997 revival of the show at the London Palladium and then on tour.  The comedian and actor best known for his TV appearance including “The Russ Abbot Show” has also appeared in numerous musicals including My Fair Lady and Chitty Chitty Bang Bang, Doctor Dolittle and The Producers.

Special offer: Save £21 on tickets to see Oliver! at the Theatre Royal Drury Lane in London

LEND ME A TENOR

Sally Ann Triplett and Matthew Kelly are to star in a new production of Lend Me a Tenor the Musical this autumn. The show will run at the Theatre Royal Plymouth from 24 September and then transfer to the West End (theatre to be announced).

Peter Sham and Brad Carroll’s musical, based on Ken Ludwig’s comedy, will be directed by Ian Talbot.

Other cast members include Damian Humbley and Michael Matus.