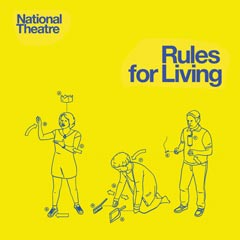 The Guardian
★★★★
“Personal crises plunge order into chaos in Sam Holcroft’s intelligent and superbly cast yuletide comedy directed by Marianne Elliott.”  “a hilarious Ayckbourn-style family comedy with an analysis of individual survival strategies.” “it starts out simple but descends into madness”. “The performances are also a joy.” “this is an intelligent comedy that leaves us questioning at what point the rules for living we all adopt become a form of entrapment.” ‘An exuberant production. Stephen Mangan and Miles Jupp are a joy.'
Read more
Daily Mail
★★★
‘Like Ayckbourn in a food whizzer, with a dash of vodka and bitters. The acting is top-flight.' “The plot zooms out of control and the earlier comedy of English understatement – at which Mr Jupp excels – yields to something younger, crazier“  “plenty to watch and the acting is never less than top-flight.”
Read more
Evening Standard
★★★
‘Scorching one-liners, and delicious performances. Packed with moments of inventive physicality.' “There's plenty to savour in Rules for Living — a glorious food fight, a few scorching one-liners, and some delicious performances.”
Read more
The Stage
★★★
“An inventively staged, if rather broad, family comedy”
Read more
Time Out
★★★
“Plays cannot live by rules alone, but Sam Holcroft makes a good go of trying in her suburban comedy of manners.”
Read more
👤WestEndTheatre 📅25 March 2015
Tags: Claudie Blakley, Daisy Waterstone, Deborah Findlay, JOHN, Maggie Service, Miles Jupp, National Theatre, Reviews, reviews round-up, Rogan, Rules for Living, Sam Holcroft, Stephen Mangan