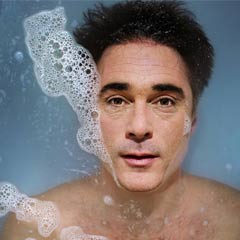 Kill Me Now is a black comedy about Jake who has sacrificed his career as a writer to care for his teenage son Joey. Both are keeping secrets – Jake about his love life and Joey about his plans for the future.  But when disaster strikes, they are forced to ask who’s really looking after who.

Bittersweet, fast-paced, ricocheting between the comedy and tragedy of disability, Kill Me Now is a funny and moving play about how we care for the people we love.

Greg Wise makes his return to the London stage after 17 years for the European première of this ground-breaking play.  Award-winning playwright Brad Fraser and Founding Artistic Director of The Royal Exchange Braham Murray reunite for their sixth creative collaboration.

★★★★ ‘Greg Wise is beautifully natural and very moving’ The Times

★★★★ ‘Remarkable. I wouldn’t be surprised if this production gets a West End transfer’ Whatsonstage

See the official trailer at:

Book tickets to Kill Me Now

Terms and condition apply. Prize is valid until 26 March 2015. Subject to availability. Prize is as stated and cannot be transferred or exchanged. No cash alternative will be offered.