Following a critically acclaimed sell-out run in Stratford-upon-Avon, the RSC is to capitalise on the early closure of Di and Viv and Rose with a transfer of Oppenheimer into London’s Vaudeville Theatre. Commissioned by the RSC, Morton-Smith’s epic and thrilling new play tells the story of ‘the father of the atomic bomb’ J.Robert Oppenheimer, taking us into the heart of the Manhattan Project and revealing the personal cost of making history.

RSC Artistic Director, Gregory Doran, said: “I am so pleased that Tom’s wonderful play can be seen by London audiences. The epic nature of the subject and the broad sweep of the narrative is something we have always encouraged in our commissioned new work. This is a direct legacy of Shakespeare, who, of course, was once a ‘new writer’ himself.”

Full casting is yet to be confirmed, however John Heffernan will reprise the role of Oppenheimer and it is expected that most of the cast will return for the West End production.

The creative team behind Oppenheimer include playwright Tom Morton-Smith, with direction by Angus Jackson, scenic design by Robert Innes Hopkins, lighting by Paul Anderson, sound by Christopher Shutt and choreography by Scott Ambler.

1939: fascism spreads across Europe, Franco marches on Barcelona and two German chemists discover the processes of atomic fission. In Berkeley, California, theoretical physicists recognise the horrendous potential of this new science: a weapon that draws its power from the very building blocks of the universe. The ambitious and charismatic J Robert Oppenheimer finds himself uniquely placed to spearhead the largest scientific undertaking in all of human history.

Determined to cast off his radical past and struggling with tempestuous relationships with his colleagues, wife and mistress, Oppenheimer finds himself thrust into a position of power, racing to create a weapon so devastating that it would bring about an end not just to the Second World War, but to all war. 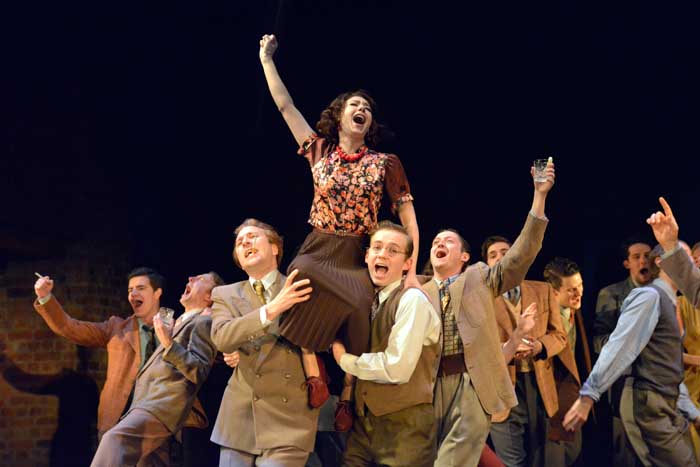 Oppenheimer at the Vaudeville Theatre