Save £26 on tickets to Sister Act at the London Palladium 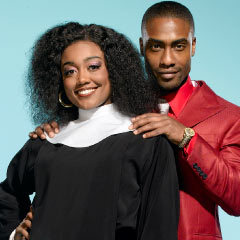 westendtheatre.com presents £26 off tickets to major musical SISTER ACT at the London Palladium.

This hugely enjoyable show stars award-winning actress and Over The Rainbow judge Sheila Hancock as Mother Superior and rising new star Patina Miller as Deloris – plus ex-Blue band member Simon Webbe will be joining the cast from 31 May.

The show has been hailed by critics as “glorious fun!” (The Daily Telegraph),”a divine all singing, all dancing musical comedy!” (Daily Express) and “Sister Act answered all my prayers and more!” (Daily Mail).

SISTER ACT features a score by Alan Menken, eight-time Oscar winner and the genius behind many of the world famous songs from Disney’s movies, including The Little Mermaid, Beauty & The Beast, Aladdin and Enchanted, with lyrics from his long time collaborator, Glenn Slater.  The book is by the award-winning team, Cheri and Bill Steinkellner, whose writing credits include the classic television comedy Cheers, and the production is directed by Peter Schneider.

When Disco diva Deloris Van Cartier witnesses a murder she is put in protective custody in the one place cops are sure she won’t be found – a convent! Disguised as a nun, she finds herself at odds with both the rigid lifestyle and an up tight Mother Superior. Using her unique disco moves and singing talent to inspire the choir Deloris breathes new life into the church and community, but in doing so blows her cover. Soon the gang is giving chase only to find them up against Deloris and the power of her new found Sister Hood.

Sister Act is based on the smash-hit movie, and produced by the movie’s original star Whoopi Goldberg.

Book tickets to see Sister Act and save £26 on tickets