A video teaser has been released by the BBC ahead of their Radio 2 broadcast of the Miss Saigon 25th anniversary gala. 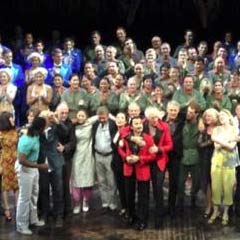 Finale of the Miss Saigon gala at the Prince Edward Theatre

A recording of the 25th anniversary gala performance of Miss Saigon will be broadcast tonight on BBC Radio 2.

At 9pm on Radio 2 Michael Ball will host a special broadcast of the Miss Saigon Gala celebrating the show’s 25th anniversary.

Recorded at the Prince Edward Theatre on 22 September 2014, the broadcast will feature the entire show including the spectacular celebratory finale that included members of the original company – including performances from Lea Salonga and Jonathan Price.

The show stars Eva Noblezada as Kim, Alistair Brammer as Chris and Jon Jon Briones as The Engineer.

During the interval Michael Ball will talk to some of the people involved in the show.

A teaser trailer for the BBC Radio 2 Miss Saigon broadcast