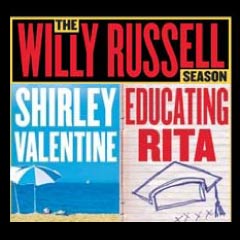 The Menier Chocolate Factory’s double-bill of Willy Russell plays will join his long-running musical Blood Brothers in the West End from 8 July.

Two of Russell’s best known plays,  Educating Rita and Shirley Valentine, which have been a critical success at the Menier, will transfer to the Trafalgar Studios in London for a limited 16 week run.

Educating Rita is directed by Jeremy Sams, who will direct Andrew Lloyd-Webber’s new production of The Wizard of Oz early next year.  Shirley Valentine is directed by Glen Walford, and both shows have designs by Peter McKintosh, lighting by Paul Anderson and sound by David Ogilvy.

Book tickets to Educating Rita at the Trafalgar Studios

Book tickets to Shirley Valentine at the Trafalgar Studios

Tim Pigott-Smith received a 2010 Olivier Award nomination for his performance as Ken Lay in Enron at the Noel Coward Theatre.  His extensive theatre credits include Pygmalion at the Old Vic, Little Nell for the Bath Theatre Royal, Hecuba for the Donmar Warehouse and Mourning Becomes Electra for the National Theatre as well as many productions for the Royal Shakespeare Company, the National Theatre and Bristol Old Vic.  On film his credits include Alice in Wonderland, Quantum of Solace, V for Vendetta and Bloody Sunday.  His more recent television credits include The Queen, Midsomer Murders, On Expenses and The Last Flight to Kuwait.

Laura Dos Santos has most recently starred opposite Bill Nighy in the BBC Radio 4 adaptation of Educating Rita, broadcast last Christmas.  Her previous theatre credits include We Will Be Gone at the Camden People’s Theatre, Look Back In Anger at the Jermyn Street Theatre, Stags and Hens at the Royal Court Liverpool, On The Middle Day at the Old Vic Theatre, In Your Hands at the New End Theatre and The Morris at the Liverpool Everyman Theatre.  Her television credits include Bad Girls, Fingersmith, Innocent Party and The Bill.

Jeremy Sams’ directing credits include The King and I at the Royal Albert Hall, The Sound of Music at the Palladium and on tour in the UK, Donkeys’ Years at the Comedy Theatre, The Little Britain live UK tour, Michael Frayn’s Noises Off at the National Theatre which transferred to the West End and Broadway and Spend Spend Spend at the Piccadilly Theatre and on tour nationally.  His many adaptations and translations include The Rehearsal, Mary Stuart, La Bohème, The Magic Flute and The Merry Widow. His composing credits include Jane Austen’s Persuasion, for which he won a BAFTA and The Mother for the BBC, Arcadia for the National Theatre and The Merry Wives of Windsor for the Royal Shakespeare Company as well as the film score for Enduring Love for which he won the Ivor Novello Award for Best Film Score.  He has also adapted the book of the musical Chitty Chitty Bang Bang. 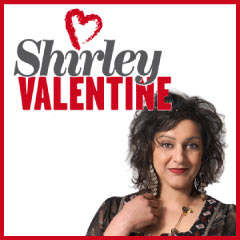 Meera Syal is best known for her television work including Goodness Gracious Me, The Kumars at Number 42 (for which she received a BAFTA nomination for Best Comedy Performance), Life Isn’t All Ha Ha Hee Hee, My Sister Wife and Beautiful People.  Later this year she will be seen in the new series of Dr Who playing geologist Nasreen Chowdhury opposite Matt Smith.  Her theatre work includes Rafta Rafta, The Vagina Monologues and Serious Money.  Syal is currently filming My First Love for Sky Arts Documentaries in which she returns to a past love, jazz singing.  Following her mentoring sessions with Jacqui Dankworth, she performed at Ronnie Scott’s earlier this year.

As well as Educating Rita and Shirley Valentine, both of which were made into major award-winning features films, playwright, lyricist and composer Willy Russell is the author of the long running West End hit Blood Brothers. His other work includes John Paul George Ringo…& Bert, Stags and Hens, One for the Road and Breezeblock Park. His writing for television includes Our Day Out and One Summer. Russell’s plays have been performed in many countries across the globe, winning countless awards as well as academic honours.  Willy Russell’s Our Day Out The Musical will play at the Royal Court Liverpool this Autumn.