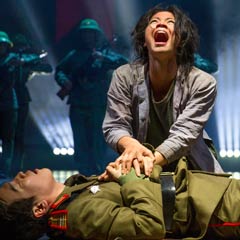 Miss Saigon to be broadcast on BBC Radio 2 on Sunday 28 September 2014.

Impressario Cameron Mackintosh has announced that his hit musical MISS SAIGON, currently playing at the Prince Edward Theatre in London, is to celebrate its 25th anniversary with a special gala performance.

Playing on Monday 22 September 2014, This gala performance of Boublil & Schönberg’s Miss Saigon celebrates 25 years since the musical originally premiered at the Theatre Royal Drury Lane on 20 September 1989 – where it played for 10 years and holds the record at the theatre for the longest-running show.

Members of the original Theatre Royal Drury Lane production will join current cast members at the Prince Edward Theatre on 22 September for a special finale.

Tickets to the gala will be set at 1989 prices and will be on sale on Tuesday 26 August 2014 at 12 noon, with fans given priority from 10am on Miss Saigon social networks or direct from the box-office at the Prince Edward Theatre on Old Compton Street.

The gala performance will also be recorded by the BBC for a special broadcast in full on BBC Radio 2 on Sunday 28 September.

In other news, the first Live Cast Recording of the entire show featuring the 2014 company will go on sale on Monday 22 September released by Universal Music and First Night Records.

The current production of Miss Saigon, which opened to rave reviews in May 2014, features a cast that includes Jon Jon Briones as The Engineer, Eva Noblezada as Kim, Alistair Brammer as Chris, Tamsin Carroll as Ellen, Kwang-Ho Hong as Thuy, Hugh Maynard as John and Rachelle Ann Go as Gigi.

">
Video: Watch Michael Ball & Jamie Bogyo sing Love Changes Everything from Aspects of Love
">
Jonathan Bailey to present new BBC Radio show about theatre and AIDS
">
The Stage reveals its Stage 100 for 2023; Nadine Dorries hits the top spot
">
Crazy For You to open at the Gillian Lynne Theatre in 2023
">
Cast announced for Ain’t Too Proud at the Prince Edward Theatre
">
Francesca Lara Gordon and Sam O’Rourke join Mary Poppins for final weeks
">
MJ The Musical to open at the Prince Edward Theatre in 2024
">
Frozen The Musical picked for BBC Children in Need Radio 2 Gala
">
Ain’t Too Proud – The Life and Times of The Temptations to open at the Prince Edward Theatre in London
">
Miss Saigon to be revived at Sheffield Theatres as part of 2023 Season, Joanna Ampil to play the Engineer
">
Mary Poppins The Musical – Exclusive Prices
">
Martin Guerre in new revival: Les Mis creators Boublil & Schoenberg to reimagine the show

">
Cameron Mackintosh speaks about Phantom closing on Broadway
">
The Phantom of the Opera to close on Broadway after 35 years
">
Stage Spy: Is Crazy For You heading to the West End?
">
Mary Poppins release new production photos – first look
">
The Phantom of the Opera tickets now available to book March 2023 with new performance schedule from October

">
Mary Poppins to close in London’s West End
">
Video: Mary Poppins at West End Live 2022 in London
">
New casting announced for The Phantom of the Opera in London