Irving Berlin’s White Christmas to play the Dominion this Christmas 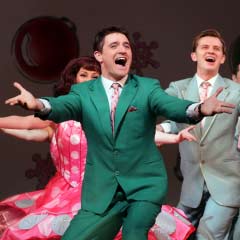 TV presenter and former boy soprano Aled Jones is to make his West End debut this Christmas in a revival of Irving Berlin’s classic White Christmas.

Also starring in the limited season at the Dominion Theatre is Tom Chambers, who won Strictly Come Dancing and starred in Top Hat in the West End.

This will be the show’s West End premiere and will re-open the newly refurbished Dominion Theatre on 8 November 2014 for a limited eight-week run until 3 January 2015.

A 30-strong cast and 17-strong orchestra will feature in the show, with other cast including Wendi Peters as Martha, Graham Cole as General Waverley, Rachel Stanley as Betty Haynes and Louise Bowden as Judy Haynes.

The show is based on the movie classic which starred Bing Crosby, Danny Kaye, Rosemary Clooney and Vera Ellen and has music and lyrics by Irving Berlin and a book by David Ives and Paul Blake.

Irving Berlin’s White Christmas was originally directed on Broadway by Walter Bobbie, and will be directed at the Dominion by Morgan Young with choreography by Randy Skinner.

Book tickets to White Christmas at the Dominion Theatre in London