Review of Posh at the Royal Court theatre in London

Given the Royal Court’s long-running anti-Establishment bias, you didn’t have to be Nostradamus to predict that Posh would be a loaded play about class. 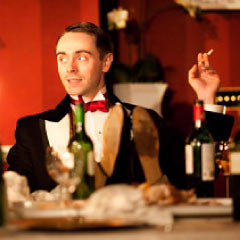 It’s set in a private dining room of an Oxford gastropub where The Riot Club, comprising ten pukka male students in their early twenties, meet for a ritualistic dinner whose main course is a ten-bird roast, and where the bottles of wine outnumber the guests.

All harbour an inflated sense of entitlement, convinced they are responsible for putting the ‘great’ in Great Britain – past present and future, and resent the fact they are no longer in power.

Bright but foul-mouthed, conspicuously debauched (they each bring a sick bag with them as a hedge against excessive eating and drinking), and with a stereotypical Hooray-Henry approach to the world, practically everything they say reeks of a snobbish class-consciousness rather than class.

With ten characters in the mix, playwright Laura Wade, by necessity, has chosen only a handful on whom to concentrate. And while each has his revelatory moments, a  few, such as Tom Mison, as James, the Riot Club’s president, David Dawson as their resident gay poet (deliciously named Hugo Fraser-Tyrwhitt), Henry Lloyd-Hughes as Dimitri, a Greek by name but an English toff by nature, and most memorable of all, Leo Bill as the group’s repellently outspoken (and violent) member Alastair, make the most impact.

Indeed, the one element not in short supply is impact, and after the initial hour or so – the time Wade allows her characters to establish themselves, the play dramatically shifts gears. The meal starts uneventfully enough. There’s some discussion about the wine on offer and it’s discovered that the ten-bird roast comprises only nine birds (no guinea fowl could be found). Nor does the The landlord (Daniel Ryan) endear himself by asking  the lads to keep the volume of noise down as other paying customers have complained.

The evening is further compromised when a ‘prozzer’ (prostitute) called Charlie (Charlotte Lucas)  who has been booked for the night refuses to indulge in the sex act expected of her and is forced to leave when the landlord discovers her presence. The evening climaxes not in sex, despite a clumsy attempt on behalf of one of the boys to kiss the landlord’s waitress daughter (Fiona Button) against her will, but when the aggressive Alastair floors the landlord with a vicious uppercut after they trash his dining room.

It’s at this point that incredulity supersedes shock as all ten students, oblivious of their victim’s life-threatening wounds, stand around bickering and apportioning blame rather than calling an ambulance.

Despite their all-for-one and one-for-all philosophy, self-preservation kicks in and the rest of the group decide that Alastair, who administered the blows, should take the blame.

Wade’s coup d’grace and her ultimate thrust of the dagger into the heart of a political party she clearly despises, is a final scene in which an influential Tory MP (Simon Shepherd) reassures an unrepentant Alastair that the party needs more men like him, and that the influential old-boy network to which he belongs will help clear his name prior to recruiting him into Conservative politics.

If ever a play loaded the dice to make a point, this is it. The relish with which the playwright hammers home her message comes dangerously close to caricature and you will search in vain for a smidgen of decency among her ten offensive toffs, not one of whom appears to have a single redeeming feature.

Yet there is undeniable ingenuity in the way the play is constructed, in the characters’ authentic speech patterns and in the author’s ability to juggle so many characters without losing focus.

Laura Wade is certainly a talent to watch and  it will be interesting to see how she handles a play with less easy targets and with a fairer, more balanced point of view.

Lyndsey Turner’s skilful and fluent direction and Anthony Ward’s settings contribute immeasurably to the success of an evening, which although flawed and manipulative, packs quite a wallop.