Monty Python’s live show at the O2 is to be broadcast into cinemas worldwide. 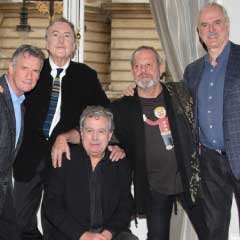 Legendary comedy team Monty Python will see the finale of their ten date set at the O2 Arena in London this summer broadcast live into cinemas around the world.

“Monty Python – Live (mostly) One Down, Five to Go” will be broadcast simultaneously to 450 cinemas in the UK and 1,500 across the world including US, Australia, Sweden, Russia and Poland on 20 July 2014 – the last night of their ten date show at the O2.

Starring Monty Python’s John Cleese, Michael Palin, Eric Idle, Terry Jones and Terry Gilliam, the comedians are coming together for one last time to give fans the best bits from their legendary sketches.

Picturehouse Entertainment, the distribution arm of Picturehouse Cinemas, announced today that they have secured the distribution rights to screen the show following their broadcasts of the Doctor Who 50th anniversary episode and National Theatre, RSC and Bolshoi Ballet productions.

Monty Python last performed together in London over 40 years ago at the Theatre Royal Drury Lane.

The Monty Pythons released a statement today saying, “Thanks to the wonderful invention of moving pictures, The Last Night of Monty Python is coming to a cinema near you. Get your knotted handkerchiefs out and warm your brains one last time at any one of 450 cinemas across the UK, and 1,500 across the world. Join the crowd live from London’s O2 in a final weepy, hilarious, uproarious, outrageous farewell to the five remaining Pythons as they head for The Old Jokes Home … on the big screen, in HD.”

Book tickets to Monty Python Live at the O2 Arena