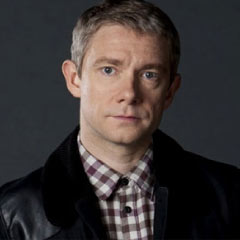 On TV Martin played Tim in the The Office for the BBC. He is currently starring as Dr Watson in the internationally acclaimed show Sherlock for the BBC alongside Benedict Cumberbatch. Coming up on TV Martin plays the lead role of Lester Nygaard, alongside Billy Bob Thornton, in the Coen brothers television adaptation of Fargo.