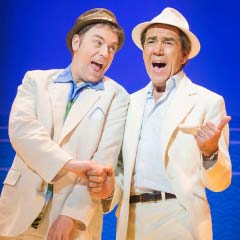 The Guardian
★★★★
"Jerry Mitchell's production and Peter McKintosh's sets and costumes also usher us into a world of impossible glamour tinged with an element of self-mockery that stops the show descending into kitsch. You see this perfectly in the performance of Robert Lindsay as Lawrence. Lindsay has the great capacity for looking as if he enjoys being on stage. But he also sends up his own suavity and elegance, especially in the show's opening, hat-swapping number, in which he is like a composite of the Rat Pack. When Lindsay joshes the conductor, or begs for his aid, I was even reminded that he was the best Archie Rice in The Entertainer since Olivier."
Read more
The Daily Telegraph
★★★★
"Jerry Mitchell’s production has an admirably light touch, and he choreographs with panache. There are strong supporting performances from Katherine Kingsley as the spunky American both men are trying to seduce, John Marquez as the hangdog police chief and an endearing Samantha Bond as a lonely Englishwoman looking for love. It’s a highly entertaining and slickly staged show, and those who purchase tickets won’t feel they have been fleeced – even at West End prices."
Read more
The Independent
★★★
"Every adaptation is burdened by the question ‘What’s the point?’  If the West End’s two movie-to-stage shows in as many weeks has proved one thing, it’s that an adaptation has to be pretty radical to make the stage version worthwhile. Otherwise you end up with the largely pointless Fatal Attraction. This one, based on the 1988 comedy starring Steve Martin and Michael Caine, has been turned into a musical which is always a radical transformation, if these days pretty common. But at least there is the sense here of the creators of this 2005 Broadway hit doing something more interesting than offering film fans a nostalgia trip."
Read more
The Stage
"Dirty Rotten Scoundrels is a good old-fashioned musical comedy packed with plenty of self-referential humour, but it is also quite forgettable. Ultimately, its success will depend on audiences wanting to spend two and a half hours with a pair of shallow conmen."
Read more
Evening Standard
★★★★
"Lindsay has the ability to switch between elegance and tetchiness in an instant. Here he combines sleekness with finicky bemusement — and he scraps enjoyably with Hound, who revels in the physical comedy (he can turn beetroot red on demand). But it’s Kingsley who best embodies this escapist show’s blend of sunny entertainment and classy delivery."
Read more
Financial Times
★★
"Of course Dirty Rotten Scoundrels is a romp. Based on the 1988 movie starring Michael Caine and Steve Martin (which is in turn based on the 1964 movie Bedtime Story starring David Niven and Marlon Brando), it tells of two confidence tricksters competing to extract €50,000 from a young American woman visiting their French Riviera base of operations. Young, brash Yank Freddy reinvents himself as a war hero who needs psychotherapy to get him out of his wheelchair; urbane, mature Englishman Lawrence tries to thwart him by in turn posing as a heartless headshrinker. Each attempts to romance the visiting “Soap Queen” and to prise her purse open. Clearly silly, in other words. And yet Jeffrey Lane’s book is much sillier than either film version, and David Yazbek’s songs are sillier even than that – and neither contribution is silly in a good way."
Read more
👤WestEndTheatre 📅3 April 2014
Tags: David Yazbek, Dirty Rotten Scoundrels, Jeffery Lane, Jerry Mitchell, John Marquez, Katherine Kingsley, Peter McKintosh, reviews round-up, Robert Lindsay, Rufus Hound, Samantha Bond, Savoy Theatre
📷 Main photo: Round-up of reviews of Dirty Rotten Scoundrels at the Savoy Theatre