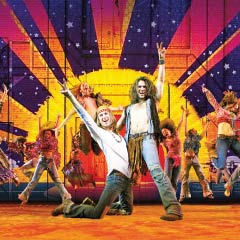 There was much reminiscing at the Gielgud Theatre last night for the opening of HAIR. The award-winning Broadway revival, which has moved lock, stock and smoking doobie to London courtesy of Cameron Mackintosh, prompted much nostalgia from the critics, many of whom remembered the original production (Charles Spencer in the Telegraph was particularly sweet:  “for old hippies like me, the show offers two and a half hours of theatrical bliss”. The critics were largely positive, with much praise heaped on Diane Paulus’s well-judged production and the enthusiasm and energy of the cast.

TI: It can’t and doesn’t have the freshness of the moment when Hair first hit a London that had just binned the theatrical censor. But it’s exhilarating, as well as oddly poignant… This is a production whose unstoppable energy and ebullient choreography more than compensate for what could, I suppose, still be considered flaws.

TE: More than 40 years since its premiere, this greatest of all rock musicals can still inspire violent antipathy among the straitlaced. That strikes me as being one of its strengths.

IN: The great thing about this joyous production of the mother of all rock musicals, a total transplant of the recent Broadway revival, is that it makes a bad book look better and the already good music sound great.

GU: Hair is more than just a musical: it is a social and cultural phenomenon, a jubilant assertion of life and freedom and a cry of protest against politicians who, in the late 1960s, sent a generation of young Americans to war.

DM: Big and fuzzy, that’s Hair. An energetic revival of the 1960s anti-war musical has just reached London and the striking thing, apart from the noise and spectacle, is that the Vietnam era’s youth were so much bolder than recent Western youngsters in their reaction to American warfare.

TI: With the marvellously febrile Will Swenson to the fore, shaking his long black locks at zombie America, I was time-warped to the turbulent, anarchic feel of 1968.

TE: The verve and energy of the company, who frequently make forays into the audience, ruffling the spectators’ hair and kissing them on the cheek, is irresistible… Will Swenson’s comic but deliberately un-endearing performance in the leading role of Berger… Caissie Levy is tender and touching as the girlfriend he treats so cruelly, Gavin Creel deeply moving as the confused Claude

IN: Will Swenson’s bestial Berger – you couldn’t say he was a ham Berger – exudes a rugged charm even when mooning bare-bottomed at the audience. He has the dark good looks of Oliver Tobias, who played the role here, and doesn’t seem to be “acting” at all. There are some great voices as well as his, notably Sasha Allen’s gorgeous Dionne, who take us back to the Age of Aquarius and Darius Nichols’s Afro-wigged Hud with a big creamy bass.

GU: I can only salute the cascading energy of her cast led by Gavin Creel as Claude, Caissie Levy as the demonstrating Sheila, Will Swenson as the shaggily stoned, self-consciously hammy Berger and Sasha Allen as the brass-lunged Dionne.

DM: [But] the lack of narrative is balanced by the panache of the actors. Only the most reactionary grump could fail to applaud their professionalism. The sheer stamina needed to keep that wall of noise going all evening is remarkable.

TI: Gerome Ragni and James Rado’s book might often have been improvised by stoned beatniks, but Galt MacDermot’s songs, with their tributes to sodomy, onanism and (weirdly) “Manchester, England”, still zing.

IN: …the score by Galt MacDermot, with a handful of chart-topping numbers and a bountiful mix of great jazz ballads, raw blues and choric anthems, remains as irresistible as ever: the “Hare Krishna” chorus elides into the “Where Do I Go?” Act I finale in which the cast’s nudity is now delivered as a graceful and moving statement of helplessness and vulnerability.

DM: That hits you, as does the paucity of plot. The first 40 minutes are almost entirely unexplained – it’s just one high-pulse introductory solo after another – and the second half suffers a long, heinously dull hallucination scene.

TE: Diane Paulus’s production brilliantly succeeds in letting the audience imagine it is present at a Sixties happening where sex and drugs and rock and roll (not to mention full-frontal nudity) combine to create a world of bleary bonhomie, naive idealism and political radicalism.

IN: Diane Paulus’s production pulls the clever stunt of turning the protest into a lament for Claude as the tribe “let the sunshine in” and disperse through the stalls, leaving a corpse in uniform out in the snow. It’s a stunning conclusion, managing to avoid both glutinous sentiment and mawkish piety.

GU: The great thing about Diane Paulus’s revival, which imports an entire Broadway company to London, is that it sees the show in two ways. It recognises that Hair was a product of its time, yet it also presents it as a vibrant, joyous piece of living theatre.

GU: Without attempting to emulate the pyrotechnic, strobe-lit dazzle of Tom O’Horgan’s original production, Paulus also makes this a genuinely tribal show in which the spirit of the ensemble is greater than any individual. Above all, Paulus and her music director, Richard Beadle, give full value to Galt MacDermot’s 40 songs

TI: And, boy, can these performers sing. It doesn’t wholly matter that the show needs a less traditional playhouse than the Gielgud when they celebrate freedom by sprawling into the aisles and the stalls. They do something better. They raise the old theatre’s roof.

TE: …this is essentially an ensemble show in which the whole company shines, while also suggesting the dark shadows of the hippie dream.

IN: It is, sui generis, one of the great musicals of all time, and a phenomenon that, I’m relieved to discover, stands up as a period piece with as much vitality and appeal as, in their own way, do No, No Nanette and The Boy Friend.

GU: But what matters is that it celebrates a period when the joy of life was pitted against the forces of intolerance and the death-dealing might of the military-industrial complex. As Shakespeare once said: “There’s sap in’t yet.”

DM: Forty years on, we are wiser about the sapping, ruinous effects of hallucinogenic drugs. We have also started to realise that the baby-boomer generation was spoilt and, in numerous ways, destructive and fake. When you consider that the draft-dodgers included later warmongers such as Bill Clinton and George W Bush, it doesn’t do much for the brand. And yet here, albeit with great gusto, albeit to shrieking acclaim, such creeps are being romanticised as enlightened and somehow brave. Despite the admirable production values, that stinks.

IN: The Independent – Michael Coveney

">
Cameron Mackintosh speaks about Phantom closing on Broadway
">
The Phantom of the Opera to close on Broadway after 35 years
">
To Kill a Mockingbird takeover cast – first look photos
">
Stage Spy: Is Crazy For You heading to the West End?
">
The Phantom of the Opera tickets now available to book March 2023 with new performance schedule from October
">
Richard Coyle and Niall Buggy join To Kill a Mockingbird in London’s West End
">
New casting announced for The Phantom of the Opera in London
">
Upstart Crow returns to the West End this Autumn
">
Stage Spy: Sondheim Tribute ‘Old Friends’ to be televised?
">
Old Friends Reviews, Photos & Videos – Stephen Sondheim tribute gala at the Sondheim Theatre in London ★★★★
">
Old Friends Stephen Sondheim Gala Concert: Full Song List