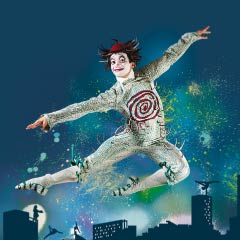 The worldwide entertainment group Cirque du Soleil has announced that it is launching a new theatrical division based in New York to develop shows for Broadway, the West End and international tours.

The Quebec based circus group has named Scott Zeiger the head of Cirque du Soleil Theatrical, which will stage productions using the company’s signature style and aesthetic but with a marked shift from the current Vegas and touring shows Cirque du Soleil audiences are used to.

Zeiger co-founded BASE, which produced Vegas adaptations of Andrew Lloyd Webber’s The Phantom of the Opera as Phantom — The Las Vegas Spectacular, and Jersey Boys and Rock of Ages.

The company’s Vegas and touring shows have proved to be a multi-billion dollar industry, but their prior theatre-based productions such as New York’s Zarkana at Radio City Music Hall and Banana Shpeel at the Beacon Theater were less successful. Shpeel was believed to have had a budget of over $20 million but closed after only six weeks due to poor box office receipts.

Zeiger said in a statement released by the company that he saw “huge potential for us on Broadway, the West End and global touring.”

Some of their biggest hits include Quidam, which is currently playing at the Royal Albert Hall until 16 February 2014.

Book tickets to Quidam at the Royal Albert Hall in London