Lesley Manville stars in the West End transfer of Ibsen’s Ghosts, following a sold-out run at the Almeida Theatre, directed and adapted by Richard Eyre.

The critically acclaimed new production of Ibsen’s classic drama Ghosts transfers from the Almedia Theatre into the West End’s Trafalgar Studios for a strictly limited run.

Adapted and directed by Richard Eyre, winner of best director for Ghosts at the 2013 Evening Standard Theatre Awards, this stellar productions stars Lesley Manville (Grief, Another Year) as Helene Alving , alongside alongside Brian McCardie, Will Keen, Jack Lowden and Charlene McKenna.

In the play, Helene Alving has spent her life suspended in an emotional void after the death of her cruel but outwardly charming husband. She is determined to escape the ghosts of her past by telling her son, Oswald, the truth about his father. But on his return from his life as a painter in France, Oswald reveals how he has already inherited the legacy of Alving’s dissolute life.

The must-see play of the Winter.

“A magnificent performance [by Lesley Manville]” The Guardian 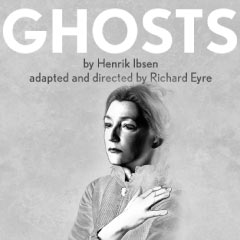 Ghosts starring Lesley Manville transfers to the West End
Richard Eyre's hit new production of Ibsen's classic play Ghosts is transferring from the Almeida Theatre to the West End for a limited season. [caption id="" align="alignright" width="240"] Charlene McKenna (Regina Engstrand) and Leslie Manville (Helene Alving) in Ghosts. Photo: Hugo Glendinning[/caption] The new adaptation by Eyre has been a huge success for the Almeida, and the play will transfer to the Trafalgar Studios in the West End from 9 December 2013. Ghosts stars Lesley Manville, who puts in an extraordinary performance as Mrs Alving, alongside Brian McCardie, Will Keen, Jack Lowden and Charlene McKenna. The play originated at the Almeida Theatre, which next month sees Doctor Who Matt Smith star in a musical adaptation of American Psycho. Lesley Manville is one of Britain’s most respected actresses. She was last seen on stage in the National Theatre’s 2012 production of Grief and her recent screen credits include May Day (BBC) and the Mike Leigh film Another Year. Richard Eyre is former artistic director of the National Theatre. He is currently directing Andrew Lloyd Webber's new musical Stephen Ward at the Aldwych Theatre. His recent stage productions include Quartermaine’s Terms (Wyndham’s Theatre) and The Pajama Game (Chichester Festival Theatre). Booking opens shortly - check back for details. LINKS Book tickets to Ghosts at the Trafalgar Studios in London