The reviews are in! Did the critics love or loathe The Commitments, the latest jukebox-style musical to hit the West End?

This brand new show, which opened last night – 9 October 2013, is a stage reworking of Roddy Doyle’s acclaimed novel, which was famously turned into a hit 1991 movie by Alan Parker.

The cast get plenty of praise in the reviews, particularly Dennis Grindel as Billy Rabitte who puts the band together, and Ben Fox as Joey The Lips Fagan, and the cast give the show the energy and passion that audiences love.

But the show gets criticism for a lack of engagement with plot and characters – something that is often leveled against Jukebox shows.

See a round-up of reviews below from the Telegraph, Guardian, Independent and more.

Book tickets to The Commitments at the Palace Theatre

"The biggest compliment I can pay Jamie Lloyd’s production is to say that it really has got soul. It’s memorably gritty at times (the swear-word count is exceptionally high) and also proves wonderfully funny and touching."

"...  the evening is much more successful as a staggered gig than as drama. Though Doyle himself wrote the book, the storytelling lacks texture; the crude banter has been drained of most of its saving charm and the characters all come over as two-dimensional comic types."

"In the end, this laddish evening is little more than We Will Rock You for soul fans. If people flock, it will be to hear a slew of familiar hits delivered with real heart by a talented young cast who don't wait for the audience to start dancing in the aisles, but simply do it themselves. Or because they want to grab the only chance they may ever get to hear I Heard it Through the Grapevine sung through a mouthful of chips. It won't be for the story of Jimmy and friends."

"Jamie Lloyd’s production has plenty of pace and energy. But while some of its roughness is intended, some seems less carefully managed. Despite the adaptation being Doyle’s work, there aren’t many subtleties. The more touching moments are lost amid the general raucousness."

"It’s not a musical so much as a play about a squabbling band, in which the actor-musicians play their own instruments and perform numbers whenever the group itself performs, rather bursting into song to express emotion or tell a story."

"Whether it becomes a box office hit depends on the extent of the enduring appetite for pop nostalgia at West End prices. But it is, at least, a significant improvement on the soon-to-depart Rock of Ages, for which it deserves thanks."

Read more
The Sunday Times
★★★★★
"The director, Jamie Lloyd, marshals this carnival of youthful energy with complete control and some lovely directorial touches. The more your ear picks up, the more you'll get out of it... My favourite moment was just before the interval, the apogee of the band's success, that one magical moment when it seems the fairy tale might come true - and the band members' mums appear in the aisles and start dancing to their children's music as they blast on into In the Midnight Hour. This moment nearly reduced me to tears. Can't explain why, really. It was just that good. It's all that good: a sweet-soul, solid-gold, five-star blast."
Read more
Financial Times
★★
"What goes wrong at the Palace? It’s not raw enough. Characters are drawn thinly. We know too little about them to care. We’re meant to believe that they play in order to become something – something noble – instead of selling sweets or packing meat. But there’s little sense of this."
Read more"Bizarre but true: For all its raucous soul sound, “The Commitments” turns out to be a reinvention of old-fashioned Mickey-and-Judy musicals. But where they “put the show on right here,” this is Roddy Doyle’s tale (previously a novel and the 1991 Alan Parker movie) of a wannabe manager kicking a feckless bunch of no-hope musicians into a band. Going hell-for-leather at the material, director Jamie Lloyd’s bust-a-gut production risks bludgeoning the audience, but resistance is ultimately futile. There are flaws aplenty, but the cast’s megawatt energy and musicianship, plus the knockout vocals of lead singer Killian Donnelly, prove overwhelming."
Read more
👤WestEndTheatre 📅9 October 2013
Tags: Ben Fox, Dennis Grindel, Palace Theatre, reviews round-up, Roddy Doyle, Soutra Gilmour, The Commitments
📷 Main photo: A round-up of press reviews for The Commitments at the Palace Theatre in London 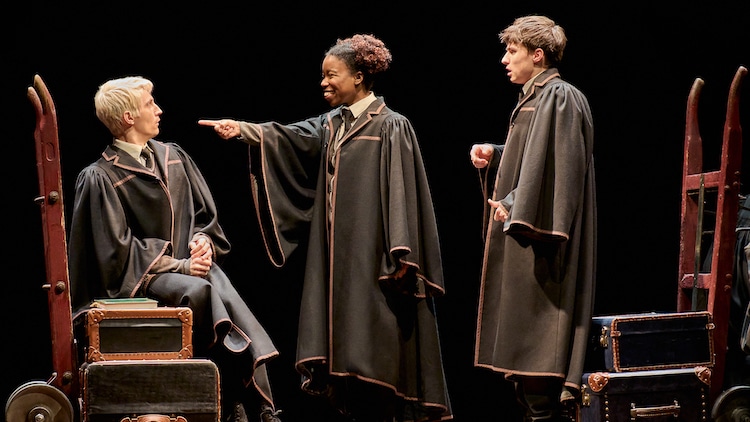