Lee Evans stars in new comedy Barking in Essex at the Wyndham’s Theatre. 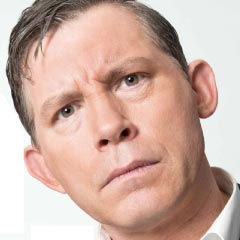 Barking in Essex is the diabolically funny new play by Clive Exton (Jeeves and Wooster) starring Sheila Hancock and Lee Evans as mother and son the Packer’s – Essex’s lovable but dysfunctional family.

Lee Evans is one of the UK’s most successful comedians having performed his live comedy shows for over 2 million fans around the world and selling millions of DVDs.

As an actor Lee has also had enormous success. On film his credits include Funny Bones, The Fifth Element, MouseHunt, There’s Something About Mary, The Ladies Man, The Martins, Plots with a View, Vacuums, The Medallion and Freeze Frame.

Stage roles include playing Clov in Samuel Beckett’s Endgame opposite Michael Gambon, and Leo Bloom in the London production of Mel Brook’s The Producers alongside Nathan Lane

Lee’s awards include ‘Special Contribution To Comedy’ Award at The British Comedy Awards 2011, and the ‘Perrier Award’ and the Time Out Award for Comedy.