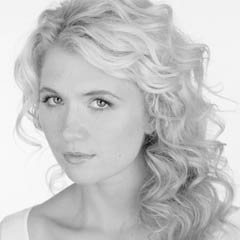 Scarlett Strallen’s theatre credits include playing Kathy Selden in Singin’ in the Rain at the Palace Theatre in London; The Music Man at Chichester Festival Theatre, Passion for the Donmar Warehouse, the title role in Mary Poppins in the West End and on Broadway, The Merry Wives of Windsor for the Royal Shakespeare Company, The Witches of Eastwick at the Theatre Royal Drury Lane, Chitty Chitty Bang Bang at the London Palladium and HMS Pinafore, Twelfth Night and Cymbeline for Regent’s Park Open Air Theatre. Her film credits include Beyond The Sea and The Snow Queen.

Scarlett Strallen plays Cassie in A Chorus Line alongside a cast that includes Victoria Hamilton-Barritt as Diana, John Partridge as Zach, and Leigh Zimmerman as Sheila.