Save up to 41% on tickets to see Thriller Live at the Lyric Theatre in London, featuring the songs of Michael Jackson. 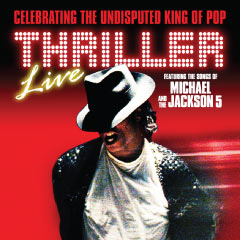 Following acclaimed UK tours and standing ovations around the world, Thriller Live moonwalked into London and hasn’t stopped – packing the Lyric Theatre in London night after night with sensational dancing and the distinctive sound of Michael and the Jackson 5.

Michael Jackson sold 750 million records worldwide and his Thriller album is STILL the world’s best-selling recording of all time. As his influence continues to widen Thriller Live celebrates the man and his music, featuring over 2 hours of smash-hit songs including I Want You Back, ABC, Can You Feel It, Off The Wall, , The Way You Make Me Feel, Smooth Criminal, Beat It, Billie Jean, Dirty Diana, They Don’t care About Us and Thriller plus many more!

SPECIAL OFFER: Enjoy up to 41% off tickets to see the show, valid for selected performances. BOOK NOW