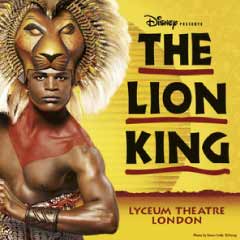 Last month Disney’s The Lion King became the ninth longest-running musical in West End history. The show, which plays at the Lyceum Theatre, pushed Cameron Mackintosh’s hit production of Miss Saigon off the spot, when it played its 4,265th performance on 18 December 2009.

The Lion King is one of only five musicals in theatre history to play for ten years or more on both Broadway and the West End, and the Broadway production also stands as the ninth longest running musical on the Great White Way.

In London the show has been by more than 8 million people and has won a slate of international awards.

It has quite a way to go to beat the longest running musical on the West End’s stage, Les Miserables, which originally opened at the Barbican Theatre on 8 October 1985. The show is closely followed by Andrew Lloyd-Webber’s The Phantom of the Opera, which is in its 24th year in the West End – and still at its original venue, Her Majesty’s Theatre. Lloyd-Webber must be hoping his sequel to The Phantom, Love Never Dies, is as much of a success. And it’s looking good given that the show has already taken around £8 million in ticket sales, with previews not starting at the Adelphi Theatre until 20 February.

Of course, all of the musicals on the longest-running list pale in to insignificance compared to the longest-running show on the London stage: The Mousetrap, which opened on the 25 November 1952 at the Ambassadors Theatre and is still going strong 57 years later at the St Martin’s Theatre.

1. Les Miserables at the Queen’s Theatre – opened 8 October 1985 originally at the Barbican Theatre

3. Blood Brothers at the Phoenix Theatre – opened 28 July 1988 originally at the Albery Theatre

6. Chicago at the Cambridge Theatre – opened 18 November 1997 originally at the Adelphi Theatre

7. Buddy – The Buddy Holly Story – opened 12 October 1989 at the Victoria Palace Theatre, transferred to the Novello (formerly the Strand) Theatre October 1995 and closed 19 May 2002

1. The Mousetrap at the St Martin’s Theatre – opened 25 November 1952 originally at the Ambassadors Theatre

3.  The Black and White Minstrel Show at the Victoria Palace Theatre – opened in 1962 and closed about 1972

Save £19.50 on tickets to see Les Miersbales – the world’s longest running show – at the Queen’s Theatre