Di and Viv and Rose By Amelia Bullmore
Directed by Anna Mackmin
Designed by Paul Wills with lighting by Jason Taylor and sound design by Simon Baker.

‘How do you want to live here? I mean we could come and go and lead separate lives. Or we could really live together. What do you think?’

Aged 18, three women join forces. Life is fun. Living is intense. Together they feel unassailable. Di and Viv and Rose is an hilarious and thoughtful exploration of friendship’s impact on life and life’s impact on friendship.

Nicola Walker plays Viv. Walker’s theatre credits include Seasons Greetings (National), Mrs Klein (Almeida Theatre), Gethsemane (National) and Relocated at the Royal Court. Her extensive television credits include Being Human, Inside Men, Spooks, Luther and The Turn of the Screw.

Claudie Blakley plays Rose. Blakley’s stage credits include most recently The Cherry Orchard at the National Theatre. Her other credits include Attempts on Her Life (National) Love and Money (Royal Exchange and Young Vic) and A Girl in A New Car with A Man (Royal Court). Television credits include Lark Rise to Candleford, Blue Geranium, Cranford and Fallen Angel . Her film credits include Lennon Naked, Pride and Prejudice and Gosford Park.

Amelia Bullmore’s debut play Mammals was awarded the Susan Smith Blackburn Prize, when it opened at the Bush Theatre. Bullmore is a well known actress from stage and screen and was most recently seen in the ITV drama Scott and Bailey, other television credits include Twenty Twelve and Shamless. Her writing credits include This Life, Attachments and Big Train.

Hampstead Downstairs is a unique development opportunity for new writing. It enables writers from a wide variety of backgrounds and experiences to trial new work in a studio environment free from the pressures of commercial interests or formal reviews, but in front of a paying audience. Each production is resourced to a level appropriate to the ticket prices charged, with members of the public invited to feedback their opinions of what they have seen to the production team. Although there will be no formal press nights, a limited number of tickets each night will be made available to critics who wish to see the shows and write about them informally. 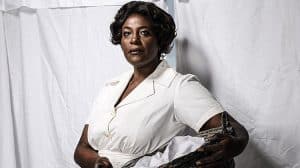