Fairground presents JASON AND MEDEA By Bristol Old Vic Young Company
Written, directed and choreographed by Tid with the company

Following a fantastic reception at Bristol Old Vic Theatre 2010 and the National Student Drama Festival 2011, Jason and Medea is heading to the acclaimed International Youth Arts Festival in Kingston. 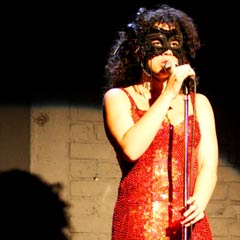 Originally developed By Bristol Old Vic Young Company with Tid, Jason and Medea is a vibrant re-telling of the adventure story of Jason and The Argonauts and the classic Greek tragedy of Medea.

Set in the criminal underworld of London during the 60s and 70s Jason is preparing to marry his fiancé Glauce. During the heightened stress of the big day the characters and dramatic events of his past play havoc. Haunted by his passionate and turbulent relationship with Medea, the manipulation and violence of his Uncle Pelias and the camaraderie of his old friends will his big day end in tragedy?

Leaping through the 60’s and 70’s the stories of many famous Greek characters such as Hercules, Hades, Orpheus and Eurydice unfold, as Jason tries to complete his epic quest to snatch the Golden Fleece.

“the production bursts out of the confines of realism to entertain us with music and comedy, but also to move us” – The Sunday Times

The show is a truly ensemble piece of theatre told through razor sharp acting, seductive song and daring physicality.

“We are delighted to be part of such an exciting festival and we can’t wait to see if the audiences love it as much as they did in Bristol.” – Edith Woolley, Assistant Director

Director Tid was recently nominated for an Off West End Theatre Award (OFFIE) for Fairgrounds production of Bonnie and Clyde and his work with Bristol Old Vic Young Company has redefined the standard of theatre made by young people.
Fairground presents Jason and Medea by Bristol Old Vic Young Company at The International Youth Arts Festival with a plan of launching it into the professional arena.

“Tom Brennan as Jason has a cool presence and talent to match. Isabelle Peters sings and acts a storm as Medea” – The Stage

Press Release: London’s West End Theatres Launch “A London Summer”
CASTING ANNOUNCED FOR NEW THEATRICAL TERROR AFRAID OF THE DARK BY… ANONYMOUS
SAMUEL BECKETT’S ALL THAT FALL STARRING EILEEN ATKINS AND MICHAEL GAMBON TO HAVE A LIMITED NEW YORK SEASON FROM 5 NOVEMBER 2013
SCENES FROM A MARRIAGE directed by TREVOR NUNN at the ST. JAMES THEATRE
MAJOR CAST CHANGES IN THE SMASH HIT ANDREW LLOYD WEBBER MUSICAL “THE PHANTOM OF THE OPERA” AT HER MAJESTY’S THEATRE, LONDON FROM MONDAY 2 SEPTEMBER 2013
Matilda The Musical Casting Announcement