One of the highlights of the West End's year took place on Wednesday, as a star-studded audience gathered at the Novello Theatre in London for the first night of Betty Blue Eyes, produced by Cameron Mackintosh.

One of the highlights of the West End’s year took place on Wednesday, as a star-studded audience gathered at the Novello Theatre in London for the first night of Betty Blue Eyes, produced by Cameron Mackintosh.

The show is Cameron’s first new musical for a decade and wowed both the audience and critics alike with its porky tale starring Sarah Lancashire and Reece Shearsmith.

Our official photographer Roy Tan was invited to follow the show’s composer George Stiles on his journey through the day and night of the launch of the show, meeting the creative team including the show’s lyricist Anthony Drewe, book writers Ron Cowen and Daniel Lipman, director Richard Eyre, and a host of famous faces.

Here we take a fascinating behind-the-scenes peek at final preparations for the show and the glamorous after-party at the Waldorf Hilton in London.

Book tickets to Betty Blue Eyes at the Novello Theatre

All news on Betty Blue Eyes 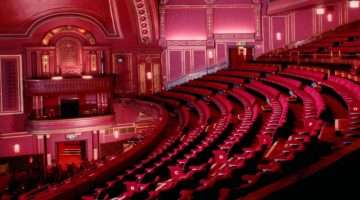